In 2009 Jamie Foxx and Robert Downey Jr. teamed up in this amazing film. Based on a true story the film focuses on the meeting between Nathaniel Ayers (Foxx) and Steve Lopez (Downey). Lopez is a columnist for the Los Angeles Times who needs a new story. While in the park he discovers Ayers playing the violin. Soon he discovers that this homeless man is a former student from Julliard and an amazing musical talent. The challenge for Lopez is his desire to help Nathaniel reclaim his life and his talent. Steve’s attempts to do this lead him on a journey to discovery of much more.

This is a great watch. I enjoyed every minute and all aspects of the film worked well together. The acting is incredible as both of the stars worked to pull off this amazing story. Foxx had an especially daunting task as he portrayed a man suffering from debilitating mental illness. 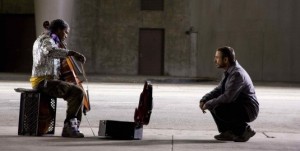 The cinematography in this film is also incredible. Each of the scenes seems perfectly framed and captures the feeling of the moment. The music that is used throughout the film lends itself to the emotion as well.

I would strongly recommend this film for anyone. It’s not a children’s movie but it’s still got a family film feel to it. the depiction of the lives of the homeless and mentally ill can be tough at times, but as a whole the film has a redeeming quality.