Over the years HBO has made some incredible movies. From The Sopranos to Deadwood I’ve been continually impressed with work they produce. They’ve also been able to sign great talent for these different projects adding to the quality of the work. Band of Brothers is not exception to the quality of work I’ve come to expect from HBO. With Tom Hanks and Steven Spielberg as executive producers this series of episodes is bound to stand the test of time. 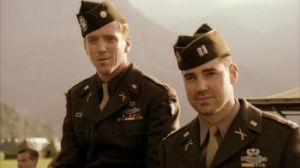 The series focuses on the 101st Airborne division’s Easy Company and their preparation and eventual participation in the invasion of Europe. The story is taken from the pages of the book by the same name written by Stephen E. Ambrose. The stars included in the series include Damien Lewis, Scott Grimes, Donnie Wahlberg, Ron Livingston, David Schwimmer, and many more talented actors. Each episode is riveting as it focuses on the challenges of war for these ordinary men who’ve been asked to do extraordinary things. The series is filmed much in the style of Saving Private Ryan which makes it feel incredibly authentic. 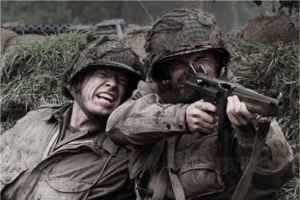 This series has all of the makings of a great Hollywood film, only it lasts for 10 episodes and almost 12 hours. The critical reception for this film was incredible, its premier happened on September 9, 2001 with an estimated 10 million viewers. After the attacks on September 11th HBO stopped all marketing for this series and still managed to have 7.2 millions viewers for the second episode. Ultimately the series earned 19 Emmy nominations and won six times including Outstanding Mini-series.

I think this might be the best mini-series ever made. I’m a huge fan of Deadwood and The Sopranos but this series far exceeds them in achievement and quality. Adding in the real history behind this story makes it far more interesting. Another great touch is the addition of interviews with the real men of Easy Company shown in clips before each episode.

If you’re a fan of history or war films this is one I have to recommend. It’s brutal and graphic and emotional, everything I feel is necessary if you’re attempting to portray the experiences of men at war.