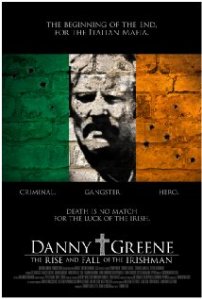 In 2009 director Tommy Reid produced this short but interesting piece on Irish mobster Danny Greene. The story catalogs the life of a man who seemed to be indestructible after many attempts on his life. Ultimately the Italian mob caught up with him, but not before he made his mark on the city of Cleveland.

The story is told through the words of friends, lawyers, police, and federal law enforcement officers who knew the man. The movie is full of film and images of Danny throughout his growth in the world of organized crime. With each move up the ladder Danny made more enemies and eventually they would try to catch up to the brazen and dangerous man. Greene is pictured below in a photo taken while he was the head of a union in the Cleveland docks.

For a short documentary this is an amazing film. Despite being a documentary the film is visually interesting for the presentation style and the large amount of archival imagery. The filmmaker managed to fit a lot of information in without making it a boring or overloaded film.

In addition to the documentary a feature film was also released in 2011 starring Val Kilmer and Christopher Walken. The film Kill the Irishman was given a small release to favorable reviews. I have yet to see this film but would be interested to see the events play out on the big screen.

If you’re into real-life crime stories Danny Greene: The Rise and Fall of the Irishman is one for you. It’s currently available on Netflix and I enjoyed it enough to give it a 3.4 out of 5 star rating.