In 1983 David Bowie starred in this amazing film directed by Nagisa Oshima. Thanks to the Criterion Collection I was able to see this one today. It was Bowie’s second major film appearance and a wonderful film. The stars in this film include Bowie as well as Tom Conti (The Dark Knight Rises) and Ryuichi Sakamoto (Babel). Merry Christmas Mr. Lawrence would go on to win Most Popular Film in the Awards of the Japanese Academy as well as several other international awards.

This is an amazing story about prisoners of war being held by the Japanese in a prison camp. The camp commander is Yonoi, a firm believer in honor who sees the POW as cowards who failed to die in battle. His desire for strict discipline clashes with the ideals of the captives he controls including Jack Celliers (Bowie) who constantly pushes the limits. In the middle of Yonio and Celliers is Col. John Lawrence, an interpreter, who is isolated from both sides as he seeks to bring understanding to the tense situation. 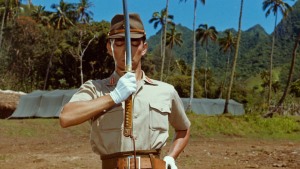 This is a film that caught me by surprise. The nature of human beings and the long-term results of actions taken are both investigated throughout the movie. Bowie does a wonderful job playing a man ruined but looking for salvation. Tom Conti is amazing as Mr. Lawrence. His emotional portrayal of a man who is isolated from everyone around him is perfect. He would even be awarded Best Actor by the National Board of Review. The soundtrack and cinematography are also amazing. The style of filmmaking is different from the styles commonly used in American filmmaking. The director made incredible use of silence throughout the film without making the film’s pace slow or falter.

I think this might make the top twenty on my list of favorite foreign films. I give this a 4.3 out of 5 stars. The film is harsh at times and may not be for everyone. I would suggest this film for those who love international film or emotional dramas.