The journey through the life of Jimmy Stewart brings us to You Can’t Take It With You a 1938 masterpiece directed by Frank Capra. Starring Lionel Barrymore and Jean Arthur in addition to Stewart, this is a film that has Capra’s magic touch all over it. It’s interesting to see a film like this coming from a time when war was brewing all over the world. Capra and Stewart would team up again but this film is an amazing example of what the two could accomplish. 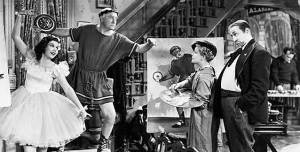 The story follows Tony Kirby (Stewart), the son of a wealthy industrialist who falls for his secretary Alice Sycamore (Arthur). Unbeknown to the two of them Tony’s father is attempting to buy the home that Alice shares with her unusual family. The sale of this home is all that stands in the way of the Kirby family’s newest deal and Alice’s stubborn grandfather (Barrymore) refuses to sell. In their own lives tony and Alice are both stuck trying to fit in with the other’s family. These factors lead to a combination of comic and emotional events that pull at the bond between Tony and lice. In the end everyone will learn that You can’t Take It With You. 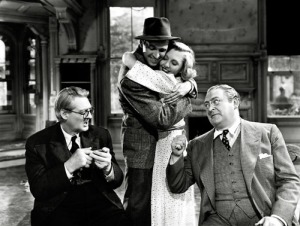 This is a film about the real value of life. In 1938 the world was looking for an escape from the dark cloud looming in Europe and Frank Capra gave it to them. It’s got dancing, music, and acting that all work together in this masterpiece.

Once again Stewart was handed a role almost written for him. He had the ability to play the rich man or poor man with such ease that the films become natural in feeling. As the world headed for war this film seemed to be an escape as it focused on the small things, small values in life. It’s an amazing film that feels relevant even today.

Check out this great clip from the film!