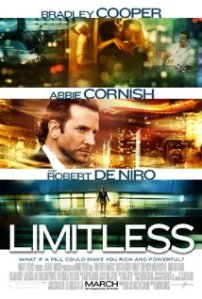 In March of 2011 this film hit theaters with an interesting premise and a star on the rise. Directed by Neil Burger whose past projects include The Illusionist and The Lucky Ones. The star is Bradley Cooper who hit it big with his role in The Hangover. The premise is the idea that a drug can bring you to a new level of brain power. Starring with Cooper is Robert DeNiro a star for whom no introduction is needed. The others in the film include a very talented Andrew Howard from films like Revolver and The Hangover II. Also featured is Abbie Cornish who also starred in Sucker Punch this year. 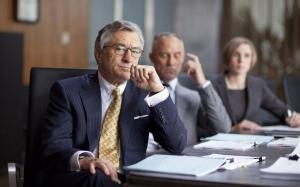 So what if a pill could make you smarter, but not just smart, genius. Eddie Morra (Cooper) finds out when a face from his past gives him a pill that helps him accomplish more in one day than he had in months. As he seeks to cash in on his new genius he’s forced to deal with some scary people like Gennady (Howard) and some powerful people. One of these powerful people takes notice when Morra becomes an overnight financial success. The man, Carl Van Loon (DeNiro) is a ruthless and powerful finance guru who wants to cash in on the talent he’s found in Morra. While Morra continues to indulge in this new drug he’s forced to seek out more and to deal with people who know he has it. The suspense culminates as the different forces involved come together for a dramatic conclusion.

This is an amazing film that the critics panned but the public seemed to enjoy. The premise is unique and seems to work well in turning Cooper into a success from a loser, he plays both roles well. DeNiro is great in this film as well, he always manages to pull off the ruthless type. Together they work well, the dialogue between the two is well-written and serves them well throughout the film. The other stars all succeed as well to make this a really fun film. 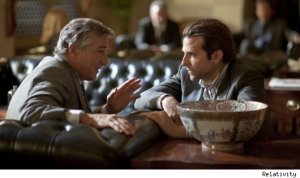 Visually this film is also very interesting. Like The Illusionist this film shows that Neil Burger has a unique style. I also enjoyed the score which accented the film well.

If I have any criticism it would be the finish to the film. I felt like a few more minutes could have been devoted to the climax of the movie.

In general this was a great movie and one I would recommend to just about anyone. This is a movie that doesn’t pull too many punches and so it may not be a “family movie night” kind of film. I give this one 3.7 out of 5 stars.