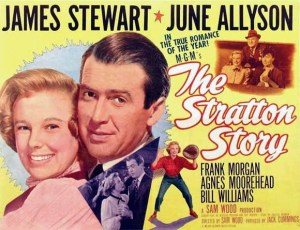 Moving into 1949 Jimmy Stewart maintained his production level with two more films. One of them is the true story of professional baseball player Monty Stratton. Stewart starred in the film alongside June Allyson and Frank Morgan. Morgan might best be known as the title character in The Wizard of Oz. This would be one of his last films before he passed away in 1949. June Allyson would become a familiar face in American films over the next 50 years. She would be paired with Stewart a number of times after this film as well.This would also be the second to last film of director Sam Wood who had been nominated for three Oscars during his career. This film would win an Oscar for Best Writing in 1950. 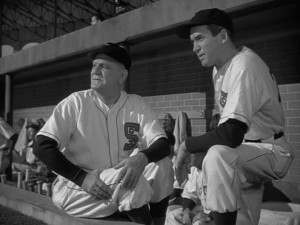 Monty Stratton (Stewart) was a small town farmer with a big arm and a dream to play baseball in the major leagues. After being discovered by a traveling scout Barney Wile (Morgan) he gets a chance with the Chicago White Sox. He goes on to a successful career which is cut short four years in when he loses his leg in a hunting accident. Supported by his wife Ethel (Allyson) he decides that he’s not going to lose his career without a fight. He becomes an inspiring example of perseverance as he works to play baseball again. 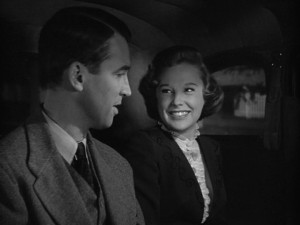 This is a great movie. The film doesn’t have the magic of The Pride of the Yankees but it does have an inspirational story. Jimmy Stewart once again takes on a role and handles it wonderfully. The film also marks his second true story role and he does this as well as he did in Call Northside 777. This would be the first of three films that star Stewart opposite June Allyson. Her natural charm lends itself well to the film and she’s able to handle the emotions of the story as well. Finally, Frank Morgan was wonderful in this film. He had been a star for a long time and in the twilight of his career he shines.

Jimmy Stewart would have a big year in 1949. In addition to two new films he married Gloria Hatrick McLean, a former model. They would be married for over 50 years and have twin daughters together. Stewart also adopted her two sons from a previous marriage. In describing his proposal he said, “I, I, I pitched the big question to her last night and to my surprise she, she, she said yes!”. Marriage didn’t slow Stewart down and he would continue to produce films for the better part of four decades.