When looking at holiday films it would be a crime to avoid this movie. Director Bob Clark made his most memorable film with this 1983 holiday classic. The film featured a great cast of known and unknown actors including Peter Billingsley, Darren McGavin, Ian Petrella, and Melinda Dillon. The movie is based on the novel In God We Trust, All Others Pay Cash by Jean Shepherd who also wrote the screenplay. The resulting film is one of the staples of holiday television programming with TBS running a full 24 hours of the film continuously. 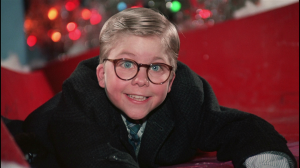 Growing up in the 40s means Ralph (Billingsley) wants to listen to the Little Orphan Annie radio show. He wants to read comic books. And he wants a Red Ryder BB Gun with a compass in the stock and this thing that tells time. With Christmas on the way he makes his request known to his quirky mother who quickly responds “you’ll shoot your eye out”. Not to be deterred he seeks out any opportunities he might have to get the gun for Christmas. All the while he’s forced to deal with the struggles of childhood and his little brother Randy (Petrella). He also has his quick-tempered father (McGavin) who is busy fighting off the neighborhood dogs and trying to win a “major award”. In the end Ralph is guaranteed to have a memorable Christmas no matter what ends up under the tree.

This is a great movie for the whole family. It’s a great depiction of childhood during the holidays in any generation. Bob Clark managed to get the best from the actors as he set the stage for great comedy throughout. In the end it’s just plain fun that doesn’t need any real analysis.

As you open your gifts this year just remember that it could be a pink nightmare under the tree. This should make every gift a little bit better. I give this film 3.7 out of 5 stars. 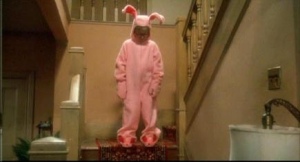