How the Grinch Stole Christmas

In 1966 Chuck Jones directed an animated version of the classic Dr. Seuss book How the Grinch Stole Christmas. The title character was voiced by the great actor Boris Karloff who also narrated the story. The record of the work Karloff did earned him a Grammy in the Spoken Word category and boosted his popularity shortly before he died. The songs were written and sung by Thurl Ravenscroft. The combination made for a film that has stood the test of time to become a Christmas classic.

This is one of the short films guaranteed to be aired by several networks each holiday season. Like A Charlie Brown Christmas the story seems to work as well today as it did 45 years ago when it first aired.The Grinch and his faithful dog create great moments throughout their caper while the Whoville residents show the true spirit of the season.

The narrator Boris Karloff was not the first choice of Dr. Seuss but this might be one of the biggest assets of the film. The voice of the Grinch included, this work by Karloff seems to fit in perfectly with the angry green Grinch. Seuss had worried that Karloff might be too scary for child viewers but this would not be an issue. In the end the work earned several awards and created a piece of television history. 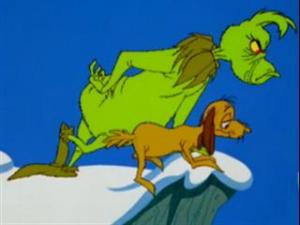 The animation is equally great as it captures the artwork of the original books while adapting to the needs of the screen. In the end the film wouldn’t have worked without the Seuss magic and they managed to create that world wonderfully.

During the holiday season I would encourage you to sit down with your friends or family and enjoy this classic. This film easily makes the list of best Christmas films ever made. I would give this excellent short film a 4.5 out of 5 stars.