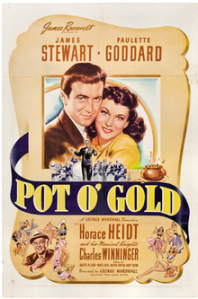 Before moving forward in the career of Jimmy Stewart I’ll take you back to 1941. Pot O Gold was a musical comedy directed by George Marshall who had over 185 director credits to his name. The film brings Charles Winninger who was also on the cast of Destry Rides Again with Stewart. Starring opposite Stewart is the beautiful Paulette Goddard who was nominated for an Academy Award for her role in So Proudly We Hail!. She is best known as one of the many wives of Charlie Chaplin who starred with him in Modern Times and The Great Dictator.  The movie is based on the popular radio program of the same name. The success of the radio program prompted the filming of the movie. Stewart would later make another film based on a radio show when he starred in The Jackpot in 1950. 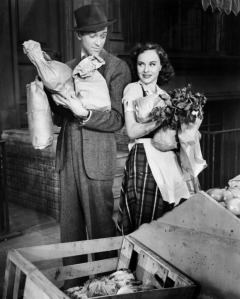 The story is about one man’s love of money and another man’s love of music. When Jimmy Haskell is forced to close his music shop he decides to take a job with his uncle, a factory owner, who lives in the big city. When he arrives in the city he’s taken in by Molly (Goddard) and the rest of the McCorkle family who love music as much as he does. What they don’t realize is that he’s the nephew of their sworn enemy Charles “C.J.” Haskell (Winninger). The band practices outside the office where C.J. works and his hatred of music has fueled a feud between the families. Now Jimmy must find a way to reconcile the families as he falls for Molly. 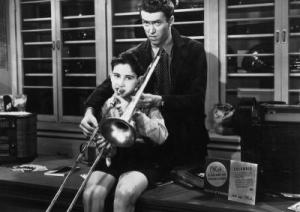 The movie isn’t the best work of Stewart’s career but it’s a fun film to watch. Stewart sings and plays the harmonica throughout the film showcasing his range of talents. The singing and musical talent of the other actors is showcased in the cheesy but fun musical numbers throughout the film.

This is a great chance to see a lesser known film by the incredible James Stewart. Although this wasn’t a commercial or critical success it’s a film the film has a lot to offer. Some sources say that Stewart thought of this film as the worst he ever made. This might have been due to the well-known difficulties of working with Paulette Goddard. In the end it’s one more film in the brilliant career of Jimmy Stewart.