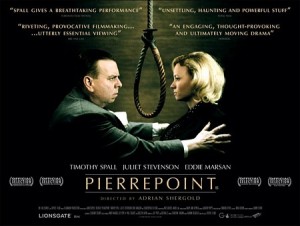 This 2005 film is an amazing and dramatic look at the life of Albert Pierrepoint. Adrian Shergold won the Audience and Silver Hitchcock Awards at the Dinard British Film Festival for his direction of the movie. The film stars Timothy Spall who might best be known for his role as Wormtail in many of the Harry Potter films. The cast also includes Juliet Stevenson who is best known for her roles in Mona Lisa Smile and Bend It Like Beckham. This film was premiered in the Toronto Film Festival and never saw wide release despite of the critical success. 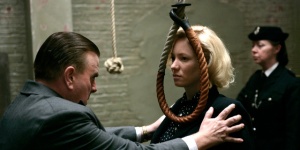 Albert Pierrepoint (Spall) is a grocery delivery man with a second job that he keeps well hidden. When the justice system of the United Kingdom is ready to execute someone they call on Pierrepoint. As the third generation of Pierrepoint to take on this job he does it with professionalism and dignity. Despite the apparent calm he exudes he carries a heavy burden within. Over a career in which he executed 608 people he was faced with many challenges. Perhaps his biggest challenge was the reaction of the public after his second career was laid bare. With his wife (Stevenson) willing to come only so far into this painful world Albert must face his choice to do the work alone.

This is an amazing story and plays out well in the film. Timothy Spall does an incredible job of playing the role in which he had to be two separate people. From his cold professionalism at the gallows to the friendly grocery deliverer Spall spans the range of emotions. As the lines blur between the two he’s able to convey the internal struggles of his character with great skill.

Juliet Stevenson is equally skilled in her role as the distant but supportive wife. She is also asked to put on two faces throughout the film and does so wonderfully.

The film is visually stunning with a cold graphic feel about it. The camera work is good and allows for a “front row” feeling to the executions. This is not a film without rough moments and the filmmakers managed to draw from the emotions as they put this movie together.

The strong film making is coupled with an incredible soundtrack. The music was done by composer Martin Phipps who also worked on Harry Brown another unknown but amazing film.

As a whole this is an emotional film with an amazing story. The subject matter is dark but like the title character the film takes it head on with a cold professionalism. The emotions of the film are an undercurrent throughout and when they surface it makes for incredible moments. I give this film 3.8 stars out of 5.