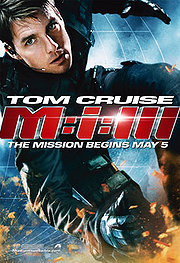 In 2006 Mission: Impossible III was released as the third film in the Mission: Impossible series. The film was released to high expectations with the casting of new Oscar winner Philip Seymour-Hoffman (Doubt) . The film also brought back Tom Cruise and Ving Rhames, two of the faces from the previous two films. In addition to the familiar faces this film also introduced Jonathan Rhys Meyers who starred in August Rush opposite Keri Russell who is also featured in this film. Also featured is Michelle Monaghan. Simon Pegg and Maggie Q are both cast as new members of the IMF team. Director J.J. Abrams was tasked with making the film, he was the third director in as many films. 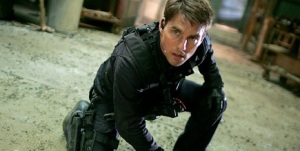 Ethan Hunt (Cruise) is getting married and working a less hazardous job for the IMF (Impossible Missions Force) as a trainer. When one of his trainees (Russell) is captured and threatened he comes back into the field to rescue her. This mission brings him into the middle of an international arms conspiracy that threatens Hunt’s new wife (Monaghan) and the world. The central figure in the conspiracy is the cold and elusive Owen Davian (Seymour-Hoffman) who has his eyes on the ultimate weapon. With the help of Luther (Rhames), Declan (Meyers), Zhen (Q), and Benji (Pegg) he’ll have to hunt down Davian to stop the deal and save his country and the woman he loves.

This is an action-packed, fact-paced film with an exciting plot. The acting isn’t incredible but Cruise and Hoffman manage to shine in their roles. Between the two of them the film holds together well and makes for great moments as the two face off. Philip Seymour-Hoffman proves throughout the film that he was deserving of his Academy Award. He is a better villain than expected and definitely better than John Voight (M:i:I) or Dougray Scott (M:i:II). The newcomers to the film all seem to fit in well although the chemistry isn’t there for the IMF team.

The special effects, stunts, and camera work are what make these films worth watching. Abrams manages to bring out a visual extravaganza as Cruise flips, dodges, and flies through the film.

The previous films directed by Brian De Palma and John Woo managed to do much better at the box office than this film. Some of this poor reception may have been due to off-screen battles between Tom Cruise and Comedy Central over an episode of South Park that poked fun at Scientology. Some fans of the show urged a boycott of the film that reached a national scale. Despite this, the critics still remained largely positive about the film.

This film is just about the action and adventure. I would recommend this film for anyone who has enjoyed any of the other films in the series. I give Mission: Impossible III a solid 3.5 out of 5 stars. It wasn’t bound for any awards but it is as entertaining as action films get.