In 1963 Gregory Peck won an academy award for his remarkable performance in Harper Lee’s To Kill a Mockingbird which was directed by Robert Mulligan. The film also won for Best Art Direction (Set decoration for black-and-white) and Best Writing (based on another medium). This amazing film competed with some amazing movies that year. Films like Lawrence of Arabia, The Miracle Worker, Mutiny on the Bounty, and The Longest Day all vied for the top prizes.

When all was said and done Peck was honored with the Best Actor Academy Award. Several days after the ceremony he received this letter from his peer and friend Gene Kelly. 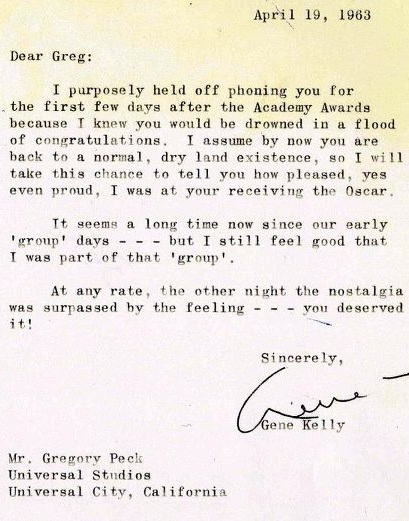 This letter is a small glimpse into the world of the Hollywood actors during the studio years. Despite having never worked together the two shared a personal connection through the small world of Hollywood stars.