Ethan Hunt and the Impossible Missions Force are back, this time in Mission: Impossible – Ghost Protocol. The movie was directed by Brad Bird, winner of two Oscars both for Best Animated Feature (Ratatouille, The Incredibles). The film stars Tom Cruise, Jeremy Renner, Simon Pegg, and Paula Patton. Also featured is Michael Nyqvist who is best known for his role in the Swedish version of The Girl with the Dragon Tattoo series produced in 2009. This is the fourth film in the series which started in 1996 with Mission: Impossible.

Ethan Hunt (Cruise) has chosen to accept a new and dangerous mission. This time it’s without the help of the government which has cut all ties to the IMF after a bomb destroyed the Kremlin. Hunt is joined by fellow IMF agents Brandt (Renner), Benji (Pegg), and Jane (Patton) as they seek out an arms dealer (Nyqvist) with the key to a nuclear war. Their race to stop the sale of these keys takes them through the middle east and Europe as they struggle to succeed without the support they are used to. Their success could clear their names and the name of the IMF as well as save the world from a violent attack.

This is definitely the best film of the Mission: Impossible series. Brad Bird has created a visual spectacular that has an over-the-top plot and great acting to go along with it. Despite being a straight-forward story, the movie holds back a few secrets and surprises which are sure to get your attention. The finished product is a movie that’s entertaining, suspenseful, and action-packed. 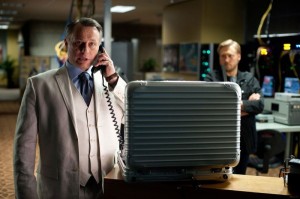 Tom Cruise continues to shine in a role that feels built for him. This time he’s called on to do a number of new hair-raising stunts. Simon Pegg brings back his role from Mission: Impossible III with a great performance as well. Newcomers Jeremy Renner and Paula Patton are also successful in their roles. Together the four stars bring out the chemistry and conflict that make these films great.

Opposite the IMF team is the villain, played by Michael Nyqvist. The relatively unknown actor manages to fit right in to the feel of the film. He does an impressive job playing opposite Tom Cruise during their confrontations.

This film is a visually and technically impressive. From the special effects to the stunt work it keeps a steady flow action coming at you. It fits in with the first three films perfectly.

If you enjoyed any of the previous Mission: Impossible films or are a fan of action films in general, this is a must-see movie. There is violence and intense action, so be aware before you bring the kids. I give this a 4.1 out of 5 stars.