After seeing Dying at Grace I felt compelled to find more work from the late Allan King. Memory for Max, Claire, Ida, and Company was the next documentary I discovered. This time King takes his cameras into the Baycrest old-age home in Toronto, Canada. There he is a silent observer again, watching the everyday lives of these elderly people. There are no interviews or set-up shots, just people living their lives in front of cameras.

This is a bit harder to watch than Dying at Grace since it meanders without any real sense of purpose. The sadness of the old-age home is evident throughout the film as some of the residents lament their place in life. The film deals with the loss of their friends, spouses, and memory. One of the poignant moments in this film is when a woman has to be reminded that a fellow resident and friend has passed away. This movie captures the cruelty of dementia and Alzheimer’s disease in a raw and unflinching way.

The film isn’t only about the bad. Some of the residents seem to relish the company of one another and share in the memories of the lives they’ve lived outside of the old-age home. The personalities of the subjects chosen are all unique and interesting. 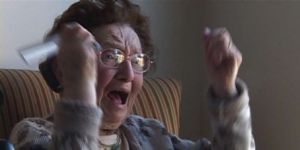 I’m not sure I could watch this documentary again. Despite the real truths captured, the film focuses on the sadness and isolation of the residents at Baycrest. Although tough to watch, Memory is a statement about the way our elderly in Western society end up more often than they should. If you’re someone looking for a socially relevant film this might be for you.

As stated before, this is not a fun watch and not easy to get through. There isn’t a clear point being made, but the documentary made its points loud and clear in the end. I give this 3.2 out of 5 stars.