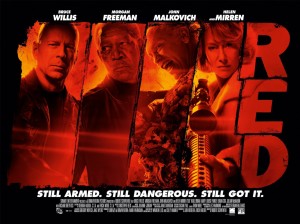 Frank Moses (Willis) is retired and he’d like to start living a peaceful life after a career as a black-ops agent. He’s even met a girl (Parker). When a hit team is sent to his home he’s forced to take the girl and run. Now he’s hooking up with fellow retirees Joe (Freeman), Victoria (Mirren), and Marvin (Malkovich). Together they’ll need to uncover who is behind the attempt on Frank’s life as well as violence against them. Despite being retired, the group has experience on their side. They’re up against an up-and-coming agent William Cooper (Urban), who’s acting on orders and has powerful people behind him. The team needs to uncover the real villain behind the attempts at their lives to survive. 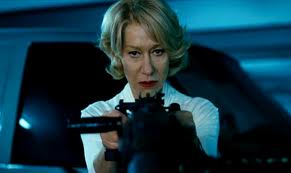 This 2010 film was directed by Robert Schwentke who directed Flightplan and The Time Traveler’s Wife. Red is loosely based on a three-part comic book series of the same name.

The stars of the film are all great together in this action-packed shooter. Willis is exactly who you think he should be through the whole film. Paired with Freeman, Mirren, and Malkovich the four make a great team with their comedic sides coming out. Parker plays her part as the damsel in distress quite well. Opposite this team is Karl Urban who is wonderful as the by-the-book bad guy. With all the great actors the film is fun to watch and has a great story. 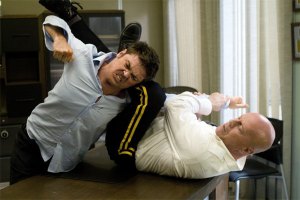 The action is actually really great in this film. Visually they use some great camera work and special effects to create some almost-over-the-top moments. It’s even better when the weapons are in the hands of Helen Mirren who seems like a natural when she’s squeezing off shots with a machine gun.

There isn’t much to knock on with this movie. It’s not perfect, but it’s exactly what you should expect. The plot is good, but not great. The story is not overly deep but still remains unpredictable at times. In the end it’s one to enjoy for its action and comedy throughout. I give this movie 3.8 out of 5 stars.