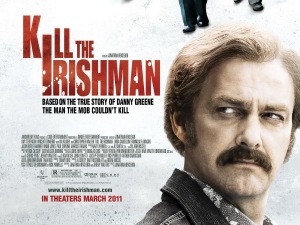 Director Jonathan Hensleigh might best be known as the man who wrote the script for Die Hard: With a Vengeance. This movie marks his second time in the director’s chair, the first being The Punisher, which he also wrote. The story this time is based on the events surrounding the attempts on the life of Irish mobster Danny Greene. This story was also told in a documentary Danny Greene: The Rise and Fall of the Irishman. The movie stars Ray Stevenson, Christopher Walken, Vincent D’Onofrio, and Val Kilmer. Ray Stevenson has had a number of television roles including a long-running part in the HBO series Rome. He was also part of the recent hit movie Thor where he played the role of Volstagg.

Danny Greene is a tough up-and-coming union leader in Cleveland during the 1970’s. This leadership comes to an end when he is faced with corruption charges and quickly becomes a FBI informant. After this brush with the law he joins with the Italian mob, and becomes one of their enforcers. His reputation as a thug is offset by his role as a modern-day Robin Hood. As his influence and ambition grow he is met with attempts at his life. Each time he manages to avoid disaster, and he flaunts his escapes for the media and those out to get him. Despite his survival it seems that everyone is out to Kill the Irishman.

This movie is based on a truly incredible real-life story. The documentary about this film shed a lot of light on this lesser-known mob figure. Sadly, this movie fails to achieve much more than a mediocre presentation. This has the feel of a made-for-television movie. The story is interesting and the acting is decent, but nothing can be called great about it. The special effects are the dead giveaway of a low-budget movie, where the action seems to disappoint with the biggest moments coming off as cheap.

I wouldn’t discourage anyone from seeing this, if you don’t have to spend any money. It’s still a good story, but the execution is weak and cheesy at best. I give this movie 2 out of 5 stars.