This is a great documentary on the life and career of Brazilian Formula One driver Ayrton Senna. Filmmaker Asif Kapadia took the story head on with this combination of old footage and new interviews. Thanks to the help of his family and teammates the filmmakers were able to capture his life both on and off the track.

In the late 1980’s and into the 90’s Senna won the Formula One Championship three times. During this span he was also part of some of the biggest controversy in the sport when he was stripped of a win that gave a fourth championship to his biggest rival. He also became a national hero to millions of Brazilians who followed his career as a source of happiness. Senna drove with passion, skill, and faith in God that would make him the best in the world. As he tried to avoid the politics of the business he became one of the most political figures in the sport. Sadly the film also captures the loss that comes with racing, including the end of Senna’s life at 34 years old. 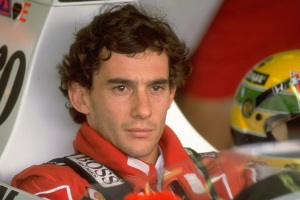 The documentary uses amazing footage from Senna’s career, from his go-cart racing to his Formula One success. The interviews and footage always seem one step ahead, as they answer the questions as quickly as they’re brought up. The editing is superb and the focus of the movie never wavers. For someone who didn’t know the story, this was a chance to learn about a great man who died too soon. I give this documentary 4.4 out of 5 stars and encourage you to check it out.