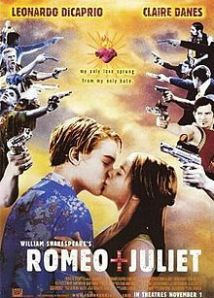 In 1996 Baz Luhrmann directed this new take on the classic Shakespeare play Romeo + Juliet. The film uses the original dialogue of the play set on a backdrop of the modern world. Australian Baz Luhrmann is known for his unique style. That style earned him an Academy Award nomination for Best Director for Moulin Rouge. This movie stars Leonardo DiCaprio, Claire Danes, John Leguizamo, Harold Perrineau, and Dash Mihok. DiCaprio, Danes, and Leguizamo are well known for their work. Perrineau is best known for his work on the hit show Lost. Mihok has gone on to have roles in movies like The Thin Red Line and Hollywoodland.

The story of Romeo + Juliet needs no introduction. This is a great adaptation of the classic story that’s bigger than life with Luhrmann at the helm. In one of his best performances, Leonardo DiCaprio is true to the youthful nature of Romeo. Equally good is the performance of Claire Danes, who brings out the youthful emotions needed for this dramatic story. John  Leguizamo and Dash Mihok play their roles with style and skill as well. Perhaps the best performance in this movie is the incredible portrayal of Mercutio by Harold Perrineau. His scenes are powerful and moving, each one seeming to set the stage for the next events to unfold.

Visually, this is a great movie. The color and the flourish which Luhrmann uses works out wonderfully. The camera work is equally good, as the scenes capture the drama, romance, and tragedy of this beautiful story.The film received an Oscar nomination for Best Art Direction for set direction.

The music throughout the film is also done wonderfully. Most of the songs used seem to date the film, but it still works today. 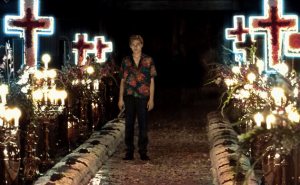 This movie opened in late 1996 at #1 in the box office. It went on to be wildly successful, both financially and critically. James Berardinelli, a critic of Shakespeare plays adapted into film wrote, “Ultimately, no matter how many innovative and unconventional flourishes it applies, the success of any adaptation of a Shakespeare play is determined by two factors: the competence of the director and the ability of the main cast members. Luhrmann, Danes, and DiCaprio place this Romeo and Juliet in capable hands.” I would agree with his sentiments wholeheartedly.

This is a great movie, one of my guilty pleasures. If you love the story of Romeo and Juliet check this movie out. It’s not the classic take, but the message is clearly stated. I give this movie 4.4 out of 5 stars.