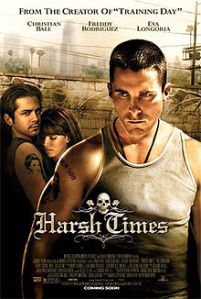 Harsh Times is the directorial debut for David Ayer who also penned the story for the film. Prior to this film Ayer was known for his writing which included hits like Training Day and the Fast and the Furious. This movie stars Christian Bale, Eva Longoria, and Freddy Rodriguez. The story is based on some of Ayer’s experiences growing up in L.A., and also on the experiences of people he knew. The three stars are all recognizable faces in movies. Bale won an Academy Award for his role in The Fighter in 2010. He’s also the title character in the hugely successful series of Batman movies. Eva Longoria is one of the stars of the hit show Desperate Housewives. Freddy Rodriguez might best be known for his role on the hit show Six Feet Under.

Life after the military was supposed to figure itself out for combat veteran Jim Davis. When his hopes to become a police officer are shattered Jim begins to fall into old habits with the people who grew up with. This childish recklessness becomes dangerous as Jim and his best friend Mike (Rodriguez) begin to take larger risks. As they continue to take risks they’re also driven apart by Jim’s erratic behavior. When they begin to lose control it could end in tragedy for the two friends and those who love them. 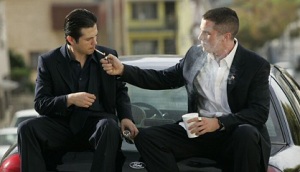 This was a film in the style of Training Day from the story to the way it was filmed. The movie is dark and emotional from the start, and feels like a cautionary tale at times.

The acting in the movie is good. Christian Bale is a talented actor and does wonderfully with his role. Sadly it seems to fall short. It’s not necessarily due to the acting, and much of the blame could be placed with the dialogue. Longoria is also decent, but doesn’t make a big impression in the movie. The best performance of the film was definitely by Freddy Rodriguez. He manages to tie the story together nicely with an emotional role. 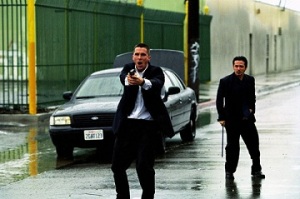 This film does have its share of weaknesses. The story seems to have little direction, and loses focus constantly. The climax of the story is hardly noticeable due to a string of “almost” moments that don’t ever seem to resolve themselves. In the end the story seems to miss opportunities to take advantage of the premise.

I’m not sure that I would recommend this movie to just anyone. It was worth the watch since I enjoyed the performance Rodriguez gave, but otherwise it left me wanting something more. If you’re a fan of Training Day or films like it, then this might be for you. I give this movie 3.1 out of 5 stars.