Hugo (Butterfield) is alone, living in a train station in 1930’s Paris. The only thing he has left of his family is an automaton his father had been fixing. Throughout each day he seeks ways to finish what his father started. He also has to dodge the Station Inspector (Cohen) in his search for the missing pieces. When he opens up his world to a young girl (Moretz) and her grandfather (Kingsley) he finds more than he expected. Together they’ll change the lives of one another. 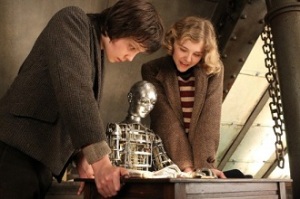 Academy Award winner Martin Scorsese took a new direction in his career with Hugo. The film comes after a career making movies like The Departed, The Aviator, and Gangs of New York. The book The Invention of Hugo Cabret, written by Brian Selznick is the basis for the movie, and the film has a long list of stars including Asa Butterfield, Chloë Grace Moretz, Ben Kingsley, Sacha Baron Cohen, Emily Mortimer, and Ray Winstone.

Perhaps the biggest name in the film is Oscar winner Ben Kingsley, who won an Academy Award for his role as the title character in Gandhi.

The young star of Hugo is Asa Butterfield who has been in a number of films including The Boy in the Striped Pajamas. His co-star Chloë Grace Moretz has also been in some good roles including a part in (500) Days of Summer.

Also featured are Emily Mortimer and Sacha Baron Cohen. Mortimer has been in films like Harry Brown, Shutter Island, and Our Idiot Brother. Cohen is best known for his movies Bruno and Borat. One other recognized name in the film is Ray Winstone who played in Edge of Darkness as well as Scorsese’s The Departed.

It’s no wonder this earned a Best Picture nomination from the Oscars. The visual aspects of this film are all amazing. I was fortunate enough to see it in 3-D which added so much to the movie. The composition of each shot is close to perfect and seems to add to the magic of the film. The movie also features a whimsical and beautiful backdrop with sets that have a wonderful warmth to them.

The acting in the movie is also incredible. Kingsley really brings out the depth of his character right away and maintains that power throughout the entire story. The young Asa Butterfield pulls off his performance with emotion that feels very real. These two anchor the film and the performances of the rest of the cast compliment the story with their performances.

Another great touch in the movie is the powerful score. Written by Howard Shore, the score is a whimsical and powerful as the sets. Shore has a knack for films like this, having previously worked on The Lord of the Rings trilogy. He’s also composed scores for Scorsese in films like The Aviator and Gangs of New York.

None of these achievements would’ve been possible without a great story to tell. Selznick’s book turned into an amazing story at the hands of Scorsese and John Logan who wrote an incredible screenplay.

I’m not sure that I could criticize this film. This isn’t to say that it’s perfect, only that it manages to accomplish everything it seems set out to. I would recommend this movie for anyone and everyone since it works as a family film and also manages to have an emotional depth not common in films like this. I give this movie 4.7 out of 5 stars.