E. Elias Merhige might be best known for his film Shadow of the Vampire (2000). This time he took on Suspect Zero, written by Zak Penn, who has worked on films like Behind Enemy Lines and X-Men: The Last Stand. The film stars Aaron Eckhart, Carrie-Anne Moss, and Ben Kingsley. 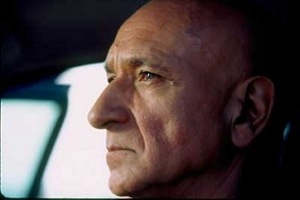 Ben Kingsley is an Oscar winner with an impressive resume. He’s done films like Schindler’s List and Gandhi. More recently he took on a role in the hugely successful Hugo. Aaron Eckhart has been in a wide range of movies from The Black Dahlia to The Dark Knight. Carrie-Anne Moss might be best-known as Trinity from The Matrix, but she’s also had recent success on television in the hit series Chuck.

When the FBI gets on the trail of a serial-killer they find that his victims all have on thing in common, they’re killers too. As disgraced agent Mackelway (Eckhart) chases the killer he’s forced to face his own demons. Meanwhile the killer (Kingsley) keeps on killing and his method of finding his next victim might be the key to catching him. As the chase continues Mackelway comes face to face with some incredible facts about the man he’s hunting. In the end the killer might be more than a mad man.

This was a decent movie with an interesting premise. Visually the movie takes some risks that work out about half the time. The camera work incorporates some unique angles and other tricks that get distracting at times, but in other moments add to the suspense.

Overall, this is a film that left me somewhere between hot and cold. The highlight of the movie is the acting of Kingsley, but I’m a huge fan and I’d probably enjoy him in a beer commercial. The other actors are good, but I’m not sure that the dialogue was written well enough to support the story. The writers also seemed to jump around a bit, making assumptions about what viewers would accept. The final product is a movie that I give 2.4 stars to. If you like a quick and simple suspense flick check this one out.