Michael Brandt made his directorial debut with this 2011 film. Brandt is better known as a writer for such films as Wanted and 3:10 to Yuma. The movie stars Topher Grace, Richard Gere, and Martin Sheen. Grace has been in a number of movies including Spider-Man 3 and Valentine’s Day. Richard Gere has been in the movie business for a long time, starring in movies like Pretty Woman and Amelia. In 2003 he won a Golden Globe for his role in Chicago. Martin Sheen is another popular face in the movie world. His career has spanned over three decades from movies like Apocalypse Now to The Departed. 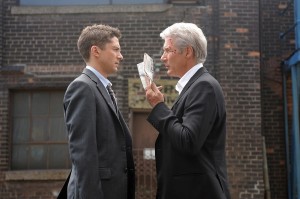 When a senator is murdered all clues point to an assassin from Russia. Now agent Paul Shepherdson (Gere) is being called out of retirement to assist in finding the killer. This killer had become an obsession for him during his career. This time he’s paired with rookie field agent Ben Geary (Grace). Under the direction of their boss Tom Highland they’ll need to go over the clues from the past to see what Shepherdson might have missed. Now the two agents find themselves investigating the case and one another as the clues open up some disturbing possibilities.

This is an interesting story that wasn’t quite executed on the screen. Brandt is a good writer, but as a director this was a rough start. The movie seemed to leave too many plot holes and some of the twists seemed to come without any premise to back them up.

The acting in the movie is good. Grace, Gere, and Sheen are all quality actors who make the most out of the roles given to them.

The rest of the movie was not especially good or bad. The movie seemed to lose focus when it tried to build suspense. The camera work and other aspects of the movie were good, but didn’t do much to improve the movie.

I would only recommend this movie to fans of the actors who give good performances. It’s not a bad movie, it just seems to leave something missing. I give this movie 2.2 stars out of 5.