This lighthearted comedy stars the great Jack Lemmon as well as Virna Lisi and Terry-Thomas. Lemmon had an incredible career that spanned 50 years and included two Oscar wins for his roles in Save the Tiger and Mister Roberts. Virna Lisi is a star in the world of Italian actors who has crossed over into films like this over a long career. Terry-Thomas was another actor with a long history of films. His resume includes a nomination for a Golden Globe for his part in The Mouse on the Moon.

Putting all of the pieces together for this movie was director Richard Quine. He worked on a number of memorable films including Paris When It Sizzles and Bell, Book, and Candle which featured Lemmon and Jimmy Stewart. 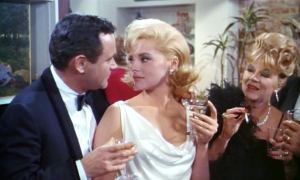 Stanley Ford (Lemmon) is a comfortable bachelor with a simple life. As a comic strip artist he has always acted out the scenes in the real world before putting them on paper. All of this changes when he wakes up next to Mrs. Ford (Lisi) after a night at a bachelor party. After failing to rid himself of his new wife through conventional means the artist decides to act out how he would kill her if she was in one of his comic strips. By his side is his faithful butler Charles (Terry-Thomas) who shares his views on marriage. When the real Mrs. Ford goes missing Stanley finds himself on trial for killing his wife. Throughout it all Stanley reminds himself and everyone around him that marriage is the real criminal and he is the victim. 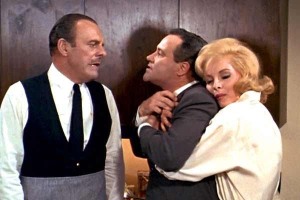 This is a fun film with a quirky 60’s humor to it. The music and visuals all date the film, but the content seems as fresh as it ever was. Intentionally sexist, the movie takes on the subject with all the one-sided power it can muster.

If anything could be criticized it could easily be explained by the age of the film. This isn’t intended to be more than what it appears to be at face value.

I really enjoyed this movie and I would recommend it to anyone. The romantic comedy fans out there should take the time to see this one. I give it 3.4 out of 5 stars.