Three time Oscar winner Steven Spielberg has created some of the most powerful movies of his generation. Schindler’s List might be the finest example of his skill behind a camera. This movie won him the first of his two Best Director Academy Awards, the second coming with Saving Private Ryan. This movie would go on to win six other Oscars including Best Picture, Best Art Direction, Best Cinematography, Best Editing, Best Writing, and Best Music. 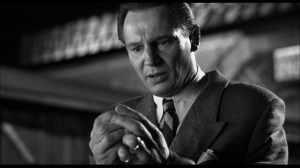 This film brought together an amazing cast including Liam Neeson, Ben Kingsley, Ralph Fiennes, and Caroline Goodall. Liam Neeson took on the title role and earned an Academy Award nomination. Also nominated was Ralph Fiennes for his portrayal of Amon Goeth, the ruthless commandant of the German concentration camps in Poland. Oscar winner Ben Kingsley was also amazing in this film, portraying the Jewish bookkeeper Itzhak Stern. Caroline Goodall also gives a good performance as Schindler’s wife throughout the war years.

As the violence in Europe gathers steam many businessmen look to profit from the war, including Oskar Schindler (Neeson). This womanizing and indulgent man looks to befriend anyone who can help him get the contracts he desires. Soon he’s running a large factory with the labor of imprisoned Jews. Later, as Hitler’s plan for the Jews becomes more evident to Schindler he begins to find himself more concerned with his workers than the profits he sought early in the war. Now as he seeks to help those who cannot help themselves he’s forced to barter with men like Amon Goeth (Fiennes), the head of the Auschwitz death camp, who see the Jews as objects. As he continues to run his business he becomes increasingly focused on saving anyone he can from death in the camps. His greatest ally is his accountant Itzhak Stern (Kingsley) who uses his skills to help Schindler bring more workers to his factory. As the final solution looms, Schindler will stop at nothing to save the people he has come to care for.

This movie brings the horrors of the Holocaust to life in startling detail. The black and white film creates a mood that adds to the sadness that accompanies the tragic events it portrays. Adding in the wonderful music of John Williams and Itzhak Perlman creates the perfect emotion for this amazing film.

The actors are all incredible in this movie. Neeson plays the ever-conflicted Schindler with a great performance that might have won him an Oscar if it wasn’t for the powerful performance of Tom Hanks in Philadelphia that same year. Fiennes took on his role and managed to create the evil and disgusting Amon Goeth with incredible skill. Oscar winner Ben Kingsley is also amazing as the quiet bookkeeper. His acting is wonderful, and brings a lot of meaning to his character. Caroline Goodall is also great as the forgiving wife of a morally conflicted man. In the end the who cast are great, and manage to recreate the events powerfully.

I don’t think this is a movie for younger viewers. The movie addresses the Holocaust head-on and doesn’t look away when things get too rough. The movie is a powerful reminder of the atrocities of World War II. Spielberg took on the subject of the Holocaust and succeeded. I give this movie 4.8 out of 5 stars.

(After the comments of other people that I respect, I’m changing my rating to 5 out of 5 stars. This is one of the great films of my time and also of all-time.)