This 2011 movie is the directorial debut of George Nolfi. Despite this, he is no stranger to Matt Damon though. He was a writer on several hit films featuring Damon including The Bourne Ultimatum and Ocean’s Twelve. In addition to Damon, this movie also stars Emily Blunt, Anthony Mackie, and Michael Kelly. Emily Blunt has been in a number of good movies like The Devil Wears Prada and Dan in Real Life. Another familiar face in this movie is Anthony Mackie who found success with his role opposite Eminem in 8 Mile. His best role was his performance in the Best Picture winner The Hurt Locker. Rounding out the cast is Michael Kelly who has had roles in a number of popular television shows and movies including Changeling and The Sopranos. 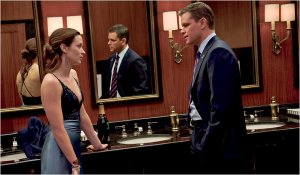 David Norris (Damon) is a man on the rise. Despite his youth, Norris is the fasting rising politician in New York and now he’s looking towards Washington. On the eve of his biggest campaign he’s faced with demons from his past that are ruining everything. In the midst of it all he meets Elise (Blunt) who takes his mind away from his troubles with their immediate connection. The two lose touch and when they reconnect Norris finds himself walking in on something he wasn’t supposed to see. Now his whole perception of the world around him has changed and he’s determined to take charge of his own destiny. Despite the danger he’s facing, he wants nothing more than to be with Elise. There are forces around him that seek to stop him. They wield incredible powers and David is forced to risk everything if he wants to make his own choices. 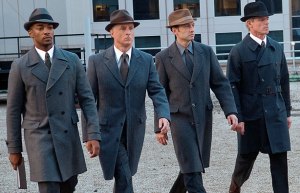 This is a unique film with an amazing premise. The movie seeks to examine the idea that others are influencing our decisions and taking away our choices. Without giving it a name, the movie questions the existence of a higher power, a sort of “man behind the curtain” idea. Despite the dangers of such a premise, the movie is interesting and suspenseful.

The acting in the movie really is wonderful. All of the stars in the film do a good job with their parts. Damon is wonderful in his role. He is asked to play two roles in the film, one as the politician, and the other as a man in love who won’t be stopped. Emily Blunt is equally great in her role as the risk-taking dancer who fell for this young and energetic politician. Michael Kelly and Anthony Mackie are also good in their roles as members of the Adjustment Bureau. The role could have come off like an Agent Smith knock-off from The Matrix but these two made it into something deeper and better.

The movie is visually great as well. The sets are designed beautifully, and the camera work takes advantage of this with great shots throughout the film.

This movie isn’t without its flaws. I think that the filmmaker was driving at some deeper points and pulled up just short of making some great statements. Roger Ebert of the Chicago Sun-Times gave the film three out of a maximum four stars, describing the movie as “a smart and good movie that could have been a great one if it had been a little more daring. I suspect the filmmakers were reluctant to follow its implications too far.”

Overall, this is a really interesting movie. The story is based on a Philip K. Dick short story, so if you’re a fan of films like The Minority Report or Paycheck this one might be for you. I give this movie 4 out of 5 stars.