This film is based on the stage play by the legendary team of Richard Rodgers and Oscar Hammerstein II. The King and I would go on to earn nine Academy Award nominations, and take home five statues. These wins included Best Music, Best Sound, Best Art Direction, Best Costume Design, and Best Actor for Yul Brynner. He had previously won a Tony for his role as the King on Broadway. For director Walter Lang this was another great musical. He also worked on movies like State Fair and There’s No Business Like Show Business.

The film’s cast includes Brynner as well as Deborah Kerr and Rita Moreno. Brynner was known as the exotic leading man of Hollywood and this role earned him his only Oscar. He had actually performed the role on stage before the movie was made. His career included performances in films like The Ten Commandments and The Magnificent Seven. Opposite Brynner was the beautiful Deborah Kerr. She was nominated for six Oscars and despite never winning she was given an honorary award from the Academy for her lifetime of work in films. She was in some of the classic Hollywood movies including From Here to Eternity, An Affair to Remember, and Black Narcissus. Rounding out the big names in the cast is Rita Moreno. She found her fame with musicals like Singin’ in the Rain and West Side Story. Her role in West Side Story earned her an Academy Award in 1962.

When widow Anna Leonowens (Kerr) takes a job overseas she finds herself living in the palace of the King of Siam (Brynner).  Soon the King and Anna find themselves learning much about one another. Soon she is tasked with proving to the Western world that the King and his people are not the barbarians they are believed to be.

Visually, this is an incredible film. The use of color in the set design and costumes is incredibly done throughout the entire movie. Kerr is beautiful throughout the film in the different dresses she appears in. The rest of the cast is all costumed in shining and colorful clothing that add to the emotion of this musical. 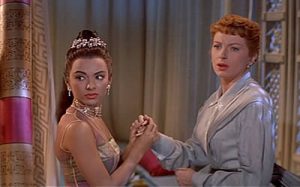 The music is classic. The teamwork of Rodgers and Hammerstein wrote so many classic songs and this movie is one example of their storytelling abilities. This movie and the songs have stood the test of time and it’s as watchable today as it was when it was released.

Brynner deserved the Oscar he won for this film. His carried the film with his powerful and often amusing performance as the King. Deborah Kerr was the perfect contrast to Brynner in this movie. She was graceful and elegant throughout the story. The rest of the cast all performed wonderfully. From the singing and dancing this movie is a look back at the way Hollywood musicals were made. The practice and perfection that followed are evident in the final product. 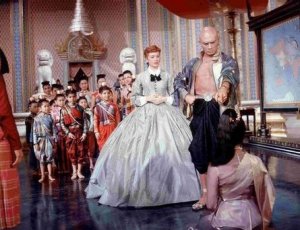 This is one of many movies that I would recommend for anyone. The music and memorable dialogue are fun to watch over and over. If you’ve seen it before I would encourage you to sit own and enjoy it again. If you’re not familiar with this movie it’s one you should check out. Beyond the music this has a beautiful story and a powerful message. I give this movie 4.3 out of 5 stars.