When awards season came around I wasn’t sure that I really wanted to see this movie. Then it picked up four Oscar nominations including Best Picture. Despite this I still delayed, even when Octavia Spencer won her Oscar for Best Supporting Actress. Now, after all the hype, I’ve found the time for this critically acclaimed film. Director Tate Taylor took on this film as the director and the childhood friend of Kathryn Stockett who wrote the book the film is based on. He’s got a resume of acting jobs that includes Winter’s Bone and this is really his first big work from behind the camera. The film features an interesting cast including Emma Stone, Viola Davis, Octavia Spencer, Bryce Dallas Howard, and Jessica Chastain.

When an aspiring author (Stone) decides to write the stories of black maids living in Mississippi she uncovers a different kind of prejudice. Each of these maids has a different story to tell, some comical and some heartbreaking. As she writes she encourages more of the maids to open up, to help fight the injustice of the “separate but equal” institution. As she seeks out the truth she discovers more about the people she’s spent her whole life with and the racism within her community. 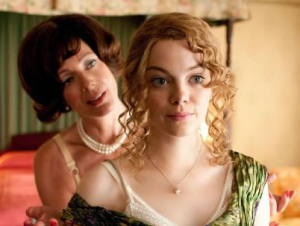 This movie is a powerful drama at heart. It also manages to find comedy within the story it’s telling. All of this is done with an amazing group of actors who came together to make this story come to life. Spencer, Davis, and Emma Stone really anchor the story with great performances. Stone was a bit of a surprise for me considering the previous films I’d seen her in. Viola Davis and Octavia Spencer are both deserving of all the praise the critics showered them with. It’s no wonder that they both received nominations for Oscars. Davis might have won were it not for a Meryl Streep sighting on Oscar day.

I also really enjoyed the performance of Sissy Spacek throughout this movie. Despite being in a smaller role, she really did a great job.

The script is really well-written for this movie. The dialogue is full of humor and touching emotional moments. It’s avoids working on stereotypes and looks at a more realistic model of the times in which the story is being told.

The movie also feels authentic, with the sets and clothing made to fit the period wonderfully. This helped to set the tone for the tumultuous setting of the movie. The visuals just add to the quality of this movie.

I don’t have any way to criticize this movie. It wasn’t the best movie of 2011 for me, but it was an amazing movie all the same. The story is emotional and touches on an important segment of American culture. If you haven’t seen this movie I would strongly encourage you to take the time. This is a really honest look at a way of life that’s long gone but still lingers in the history of our country. I give this one 5 out of 5 stars.