This powerful documentary series is another amazing work with Ken Burns behind it. This time it’s directed by Stephen Ives, a documentary film maker who worked with Burns on Baseball. This film features the voice talents a number of great stars including Eli Wallach, Jason Robards, Adam Arkin, and Hector Elizondo.

The West is a detailed look at the history of the American expedition into the Western territories of North America. The series includes amazing information found in the journals and diaries of the people who were there. There are also great illustrations and maps used to explain the way the territories were gained. Perhaps most important, the film takes a look at the reality of conquering another people. The United States took land and made it their own, and in the process displaced more than one group of people. The film also touches on the other big moments in history as they related to the expansion of America. It’s a great history lesson for those who don’t know what the true cost of our nation was. 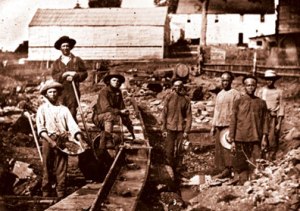 There are a lot of interesting things covered in this series. They manage to touch on the construction of the first trans-continental railroad. They talk about the settlement of some of the biggest cities in the West including San Francisco and Los Angeles. There are so many big events covered, and it’s done with great skill and incredible detail.

This is a great series. The episodes are well-organized and work nicely to condense history without taking shortcuts. This is one of the greatest strengths of Ken Burns and the people he works with. I would recommend this for anyone who loves history or documentaries. I give this one 4.5 out of 5 stars.

For more of his films, check out the Ken Burns page.