Fans of the hit show Family Guy must have collectively shouted for joy when this film became a reality. The movie features Seth MacFarlane behind the camera and voicing one of the characters. In addition the movie features Mark Wahlberg and Mila Kunis. Wahlberg has done his share of comedy, with films like Date Night and The Other Guys. Kunis has spent years as the voice of Meg on Family Guy in addition to roles in a number of other comedies.

John Bennett (Wahlberg) was eight years old when he brought his teddy bear to life with a magical wish. Now Ted (MacFarlane) and John live a life filled with fart jokes and smoking pot. John also has his girlfriend Lori (Kunis) in his life. She is hoping that John might make more room in his life for her and their relationship. With his loyalty to Ted and his love of Lori in the way, John needs to find a way to grow up without losing the two people most important to him.

When Seth MacFarlane’s name shows up I automatically expected crude humor and fart jokes. I was not disappointed with this movie. The humor is crude and often ridiculous, but it didn’t stretch things too far. Wahlberg feels perfect for his role, and performed well opposite a stuffed bear. MacFarlane managed to voice Ted nicely, and even avoided bringing Peter Griffin to mind too often. Kunis was a nice counter-balance to these two, playing the mature adult in the world of debauchery that Ted and John have created. 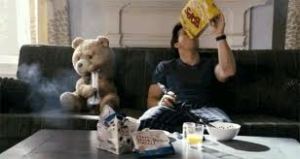 I have to admit, I really loved this movie. I don’t expect that it will win awards or anything, but it was a really funny story. The movie even pays homage to some of the worst movies of the 80’s along the way.The animation is also incredible. The work put in to bringing Ted to life paid off in making him feel like a real part of the cast. The acting is also really good from all of the big names. In addition to the three stars, Giovanni Ribisi does an awesome job with a really interesting role.

Rating this movie proved really difficult since it became an immediate guilty pleasure and I’m not sure that I can be partial. There are flaws, mostly stuff that comes along with goofy comedies. Still, if you enjoy Family Guy and other stuff like that, this might be right for you. I give this one 4 out of 5 stars.