#2 of the Top Ten Westerns

In 2009 the National Film Registry of the Library of Congress inducted this film into its archives for being ““culturally, historically or aesthetically” significant. This is a far cry from the critical failure that the film found when originally released in the United States. Director Sergio Leone was a master of the Westerns, having made films like The Good, The Bad, and the Ugly and For a Few Dollars More. This movie stars one of the great American film legends, Henry Fonda (12 Angry Men, The Grapes of Wrath, On Golden Pond). The movie also features Charles Bronson (The Dirty Dozen), Claudia Cardinale (8 1/2), and Jason Robards (All the President’s Men).

When Jill McBain (Cardinale) arrives to find her new family murdered, a stranger with a harmonica (Bronson) sets out to protect her. Soon he’s battling Frank (Fonda), the hired gun of a railroad king.

There isn’t a really good way to summarize any of the films of Sergio Leone. There is a powerful message to his work that really works because of the powerful visuals he creates. Add in a great score  by Ennio Morricone and you have movie magic. Morricone and Leone were classmates and later forged a powerful partnership that made some great films like The Good, The Bad and the Ugly.

In addition to the technical aspects of the film, the acting is amazing. Fonda gives an amazing performance playing a character that went entirely against his type. Normally known for roles as a man looking for justice, this role found him as a true villain. Opposite him are Bronson and Cardinale. Bronson is a perfect fit for the silent hero. Cardinale is also great as the young widow with a checkered past. Robards also gives a great performance in his role. 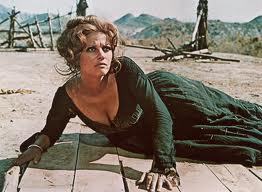 The movie has limited dialogue and relies heavily on the visuals and mood set by the score. The characters are far more complicated than most westerns tend to be. Like some of the Anthony Mann westerns, this movie doesn’t make it easy to see who is on the right side. This is perhaps one of the greatest westerns made. I would never be able to declare a winner, but this easily makes my top ten list. If you’re a fan of the “spaghetti westerns” or westerns in general, I would definitely recommend this one. I give Once Upon a Time in the West 4.7 out of 5 stars.