Based on the 1908 novel of the same name by E.M. Forster, this film was completed by James Ivory in 1985. In addition to this film, Ivory is behind other period pieces like The Remains of the Day and Howard’s End. This movie and those two films have combined to earn him three Oscar nominations for Best Director. This film features the great young talents of 1985 including Daniel Day-Lewis (In the Name of the Father), Helena Bonham Carter (The Harry Potter Films), and Julian Sands (The Girl with the Dragon Tattoo). The movie also has a list of actors who were veterans by 1985. These actors include Judi Dench (Shakespeare in Love), Denholm Elliott (Indiana Jones and the Last Crusade), and Maggie Smith (California Suite). 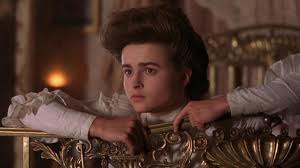 Lucy Honeychurch (Bonham Carter) and her chaperone Charlotte (Smith) find themselves in the middle of Florence in a room without a view of the city. When Mr. Emerson (Elliott) and his son (Sands) step in to fix the situation Lucy begins a series of experiences that could shape her whole life. This includes her future with the bookish Cecil (Day-Lewis) who seeks her affection. 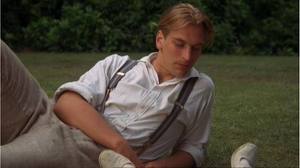 This movie is a great story told in the Edwardian Era without any attempt to embellish or modernize the settings. This means that it moved slowly at times, and really doesn’t have the Hollywood touch that I expected it to. 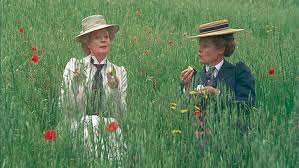 The real successes in this film are the acting, costumes, and settings. The acting was good enough for me to get lost in the characters and forget who the big names really were. Daniel Day-Lewis is one of my favorites and he blended into the story with the rest of the cast. The best performance is probably the one by Julian Sands, who I hardly knew of before this movie. He really plays a great opposite to Day-Lewis.

The acting in this film earned Oscar nominations for Denholm Elliott and Maggie Smith. 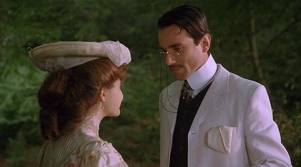 The costumes and the sets are both incredible in this film. This movie went to great lengths to bring an era to life. They accomplished this with great success. This film even won Oscars for Best Art Direction – Set Design and Best Costume Design. This combined for a visual treat that sometimes made up for slow moments in the film.

This isn’t a film for everyone. The movie moves very slowly and requires an interest in the characters themselves since they drive the story. This was a Best Picture nominee at the 1987 Oscars. If you’re a fan of classic romance or drama this is one for you. I give this film 4.2 out of 5 stars.