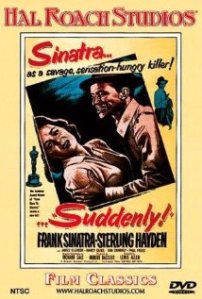 Frank Sinatra could do a lot of things well. In addition to an amazing voice, Sinatra was also an accomplished actor with an Oscar to his name. He appeared in big films like From Here to Eternity and The Man with the Golden Arm. This lesser known film is another great example of his talent. This movie was directed by Lewis Allen, a man who spent most of his career working in television. His credits include shows like Bonanza, The Rifleman, and Telephone Time. This time he took on a feature film and got to work with Sinatra as well as Sterling Hayden (The Godfather) and James Gleason (Here Comes Mr. Jordan). 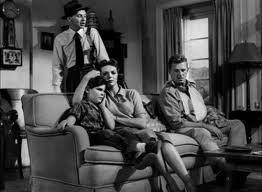 The town of Suddenly is preparing for a unique experience. The President of the United states is stopping in their town on his way to Los Angeles. Unfortunately some other outsiders are coming to town as well. When they arrive their plan is to use a house on the hill as a place from which they can shoot the President. When the family who lives there gets in the way they find themselves hostages and unwilling witnesses to an assassination attempt. As they look for ways to fight back, the family must confront a mad man. 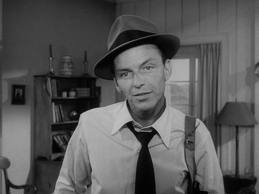 This movie was a success with the critics when it was released. Most writers gave the credit to the remarkable script by Richard Sale. The dialogue in this movie feels better than the delivery it’s given at times. Part of the struggle is the performance of the youngest member of the cast. Kim Charney played the young Pidge, and most of the movie it felt as though he was out of his league. The rest of the cast does a decent job picking up the story, with great work by Hayden and Gleason. Sinatra does a wonderful job as the methodical assassin. He worked a broad range of emotion and really brought out a great performance. 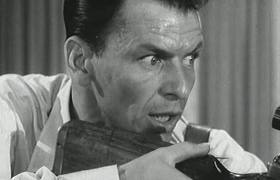 Financially the movie was also relatively successful, selling itself as a dark film featuring one of America’s favorite stars. Some critics would later cite this movie as the inspiration for another suspenseful assassination film, The Manchurian Candidate. That 1962 film also starred Frank Sinatra.

This is a fun suspense film with a great number of performances by a talented group of actors. If you’re a fan of the Manchurian Candidate this might be a movie for you. Otherwise this movie should appeal to fans of suspense, drama, and Frank Sinatra. Despite being unrated (due to the age of the film) this is a movie the whole family could watch. I give this movie 3.6 out of 5 stars.