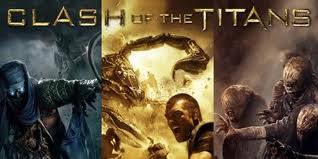 Perseus, the mortal son of Zeus, has been living amongst men and doubting the Gods since his childhood. Now as the minions of Hades threaten the safety of the mortals, Perseus is forced into battle. He’s not just battling for earth, but for the same Gods he has long doubted. He’ll need help from his men and the heavens as he seeks to defeat the God’s most feared creation.

Louis Leterrier has done some pretty cool films during his career. His work includes The Incredible Hulk (2008), The Transporter, and Unleashed. As with his other films, Leterrier took on a story that would require some pretty awesome visuals. He had a great cast to work with, including Sam Worthington (The Debt), Liam Neeson (Schindler’s List), Ralph Fiennes (Skyfall), and Pete Postlethwaite (The Town).

This wasn’t the first time this story found its way to the big screen. The last attempt was a 1981 film starring Laurence Olivier and Harry Hamlin. That movie is fun to watch, but don’t count on stunning visuals or even good dialogue. It’s really an odd selection of great actors and bad stop-motion animation. Thankfully, the stop-motion animation didn’t come along for this 2010 reboot. This time the highlight of the film is the awesome CGI done throughout. The visuals in this film are up to the challenge of the epic story being told.

With awesome visuals, it’s sad to say that the acting and the rest of the film fall a bit flat. It’s not even that the actors don’t do a good job, but more that they weren’t given a ton to work with. The dialogue is over-dramatic and doesn’t seem to come naturally from the actors. This flaw is the major one, since the action of the film isn’t really supported by anything else. Even the comic moments in the film seem oddly out-of-place. I think it’s a shame that the director didn’t take advantage of the cast he was working with. This could have been a much better film.

This is weird to say, but despite the flaws, I really enjoyed this movie. It’s mainly that I was in it for the action and the special effects. I am also one of the handful of people who really liked the 1981 version. So for myself, this was a good chance to revisit a cool story. I would caution people to go into this as a fun time, not to be blown away by an incredible movie. It has entertainment value for the casual movie night and that was enough for me to give it 2.6 out of 5 stars.