After a couple of weeks of questions and polls, the readers of this humble movie review site have chosen Four Rooms as their favorite underrated comedy. I had not seen this movie prior to the poll, so today I took the time to sit down and check it out. As far as the movie goes, it was nominated for two awards, one of them being a Razzie win for Madonna’s performance in the film. The other, an MTV Movie Award nomination for a turkey club sandwich. 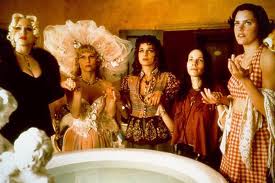 Ted (Roth), the bell boy at the Mon Signor Hotel ready for a busy night on New Year’s Eve. Thanks to four different rooms, this might be the most memorable night in his career. As he jumps through hoops for his guests, Ted finds himself face to face with a wide variety of interesting people. This includes a coven of witches, a feuding couple, a Latin gangster, and a room full of drunk and spoiled Hollywood types. These guests help to create a crazy series of intertwined events that Ted is forced to be a part of. 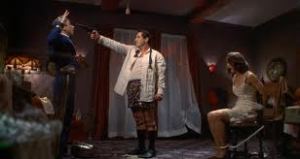 This movie is hard to really summarize. I think it had some great moments and also some very weak moments. It was definitely a great chance to see four different directors come together to create a series of unique stories that come together with interesting twists. The stars of the movie really make it worth watching. Tim Roth (Pulp Fiction) is one of my favorite actors, and this time he’s as good as always. Add in the talents of people like Bruce Willis (Looper) among a long list of other familiar faces and you have something pretty good. 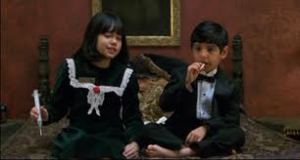 It’s always fun to watch a movie and find yourself saying “hey, it’s him” or “isn’t that her?” throughout the entire film. I did that a lot this time around. I don’t normally do much research before I see a movie since I prefer not to bring any preconceived notions with me. Some of the actors were amazing. Bruce Willis, Antonio Banderas, and Jennifer Beals were all fun to watch. On the other hand, I could have done without Madonna, who seemed out-of-place and untalented. One surprising performance came from Quentin Tarantino, who directed his segment of the film and also played a major role within it.

I’m glad I took the time to watch this movie. It was sometimes overdone with the sexual content, but there was a silver lining around the movie as a whole. Thanks for all your votes and support here at DidYouSeeThatOne.com that brought me to another new movie. This isn’t a movie for everyone, and I would keep this one as an adults only experience. I give this one 3.5 out of 5 stars.