When I think back on the Oscar nominated films, I always tend to forget that this movie won Marisa Tomei an Academy Award for Best Supporting Actress. In addition to Tomei (The Ides of March), the movie also features Joe Pesci (Casino), Ralph Macchio (The Outsiders), and Bruce McGill (Lincoln). Director Jonathan Lynn (Clue) pulls all the pieces together for a great comedy.

Bill (Macchio) and Stan (Mitchell Whitfield) are in trouble. While making their way to California, the two friends are accused of murder in a small country town. When they call for help, Bill’s mom sends his cousin Vinny. Vinny is a personal injury attorney from New York with no trial experience and a girlfriend who doesn’t shut up. Now he’s got to go up against the legal system to save the lives of these two young men. 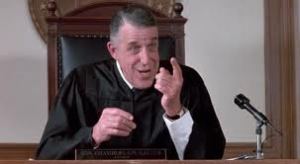 It’s not very often that a murder trial comes with this many laughs. Joe Pesci really stands out as the lead in this classic comedy. Opposite him is the amazing Marisa Tomei, who definitely earned her Oscar as the know-it-all big mouth Mona Lisa Vito. Adding to the movie is a non-Karate Kid Ralph Macchio, who does a good job as the young and scared co-defendant Bill. Like all comedies, the writing and the acting are really all that count. The acting definitely holds up its end of the bargain.

The writing is also incredible in this movie. I love good banter, the kind of dialogue that seems spontaneous when it’s written and performed perfectly. This movie has plenty of that going for it.

On the downside is the obvious age of the film. It’s fun to watch, but it’s also a trip down pop-culture memory lane. It hasn’t aged well, much like the rest of the early nineties. The age doesn’t ruin the film, but it’s constantly in your face with the clothing and other references. This might make it a bit less enjoyable for anyone who didn’t grow up with this movie.

Overall, this is a fun movie with a great script. The acting is good, and the laughs still work after twenty years. This has a bit of language that should keep it to adult audiences only. I give this one 3.8 out of 5 stars.