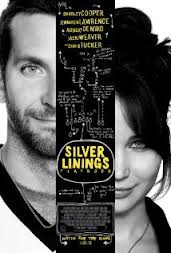 Pat (Cooper) is out of the mental hospital and home with his mom (Weaver) and dad (DeNiro). Now he’s hoping to get a fresh start with his estranged wife despite objections from everyone around him. When he’s introduced to Tiffany (Lawrence), a girl with her own issues, things get complicated. Now he’s dealing with his own mental issues, as well as the issues of everyone around him. All the while Pat is trying to remember to look for the silver lining. 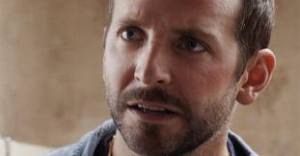 This movie came out to immediate critical praise and commercial success. Now the movie is in good company with a Best Picture Oscar nomination as well as seven other nominations. The cast includes some big names and great talent including Robert DeNiro (Jackie Brown), Jennifer Lawrence (The Hunger Games), Bradley Cooper (Limitless), and Jacki Weaver (Animal Kingdom) all in the mix. These four actors all earned nominations from the Academy for their acting parts in this great film.

The acting is the star of this movie. The four Oscar nods confirmed that for me. Cooper is great in his role as an extremely troubled man trying to overcome serious issues. DeNiro is equally good as his father, and someone who has their own challenges. Jennifer Lawrence is also great in her role as the troubled and stubborn Tiffany. Together they create an interesting and honest look at mental health issues.

The soundtrack and other technical aspects of this movie work nicely. The camera work seems to feed off the moment, sometimes feeling smooth and calm, other times very unsteady and active. These changes work well with the action in the movie.

Luckily this movie isn’t a Girl, Interrupted type of movie. The focus on Pat’s mental state is strong, but the movie doesn’t seem to have a dark cloud over it. Like the main character, the film seems to have extreme highs and lows. This really accentuates the challenges of all the main characters.

For some of the people I’ve talked to, pacing is an issue in this film. It takes a while to really get to the heart of some of the plot points, and this can make parts of the film feel too slow. I didn’t really have an issue with this, but I can see how it might be frustrating, especially with such deep subject matter.

This is a good movie. The Oscar nomination for Best Picture is definitely deserved, but I’d be incredibly surprised to see it win. If you’re a fan of drama this is one worth seeing. There are some comedic moments, as well as some tough scenes dealing with mental health issues. The language is strong, but there isn’t a lot else contributing to the rating. I give this one 4.4 out of 5 stars.