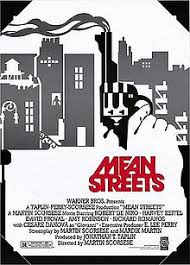 Charlie (Keitel) is a small-time numbers guy trying to make it big in Little Italy. As he looks to climb, he’s also trying to help out Johnny (DeNiro), a young and reckless hustler. As Charlie tries to find the right moves to make, he’s forced to change the way he looks at the people around him. Slowly, him and Johnny are realizing that success doesn’t come easily on the mean streets.

This is one of the early works of Martin Scorsese, and it’s a look at some of his trademark skills. The strength comes from the power of some of the individual scenes in the movie. He was able to harness the talent of the younger DeNiro and Keitel, making moments of the movie amazing to watch. It comes together in a dark and powerful movie that’s amazing to watch.

The acting is an interesting mix of great talent and unknown actors. DeNiro and Keitel really balance out this emotional and tumultuous story with great performances. For Keitel, the strength comes from his ability to display the conflicted life of Charlie. DeNiro does a great job playing a young and reckless hustler who doesn’t always grasp the consequences of his actions. Despite not having a lot of big names, the rest of the cast do a great job creating the seedy backdrop necessary for the story.

The story is part fiction and partially taken from the life of one of Scorsese’s childhood friends. The strength of the story is the lack of any Hollywood moments. Basically, there isn’t a silver lining or a powerful moment that changes life. It feels a lot like The Departed, leaving no room happy reunions. This works well for Mean Streets, which resolves itself without having to make anyone happy.

The weakness of this movie is in the story. Although it’s a powerful narrative, the story feels like it loses direction at several points. It always finds a way back, but this really hurts the pace of the movie.

This is a good movie. It’s dark and gritty, and it might not be for everyone. The language is strong and some of the scenes are very direct and intense. If you’re a fan of Scorsese, I would take the time to check this out. I give this one 4 out of 5 stars.