John McClane (Willis) is headed to Russia after finding out that his estranged son (Courtney) has been arrested in Moscow. When he arrives, John finds out that his son is actually working with the C.I.A. to prevent the sale of weapons grade nuclear material. When the plan falls apart, father and son come together to fight against determined terrorists. 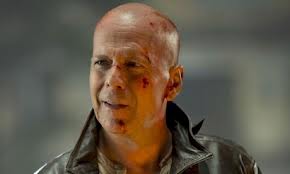 As with most action films, this movie isn’t built around Oscar-winning performances or incredible dialogue. The idea is to express the necessary emotions and then blow some stuff up. From an action standpoint, this is a decent movie. It has car chases, exploding buildings, and massive machine guns. Unfortunately, this might be only good element of the movie.

The acting in this movie isn’t necessarily bad, but they didn’t get much to work with. The dialogue feels overly sentimental and vague. They also don’t have full characters to work with. Much of the writing seems to avoid getting to know who the people really are. This includes the villains and the good guys. Overall, not much of a script for anyone to work with. Jai Courtney (Jack Reacher) is fun to watch through the action sequences. He’s also got a few good scenes opposite Bruce Willis (Looper). Together, they just couldn’t salvage this disastrous film.

Do you remember the good old days of Die Hard or even Die Hard with a Vengeance? Well, a lot of things have gotten better since 1988, but not this series. Writers Skip Woods and Roderick Thorp took on the job of creating a new adventure for John McClane and struck out swinging. I can’t really recommend this one to anyone. I give it 2 out of 5 stars.