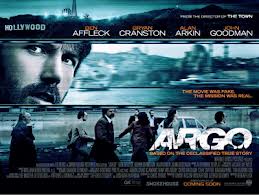 It’s 1980, and the United States embassy in Iran has been overrun. Many of the people who worked there have been taken hostage. Six people managed to escape from the embassy, and now they’re hiding in the home of the Canadian Ambassador. Back in the United States, C.I.A. agent Tony Mendez (Affleck) has been asked to find a way to get these six out of the country before the Iranian government can find them. With the help of a real movie producer (Arkin) and a famous makeup artist (Goodman), Mendez hatches a bold plan to rescue the six escapees.

This was a fun movie to watch, with a level of suspense that I was surprised to see from Affleck. All aspects of this movie worked together nicely, and the people who give out awards seem to agree. The movie has already won AFI Movie of the Year, Best Film from BAFTA, and Best Motion Picture at the Golden Globes. Now this movie is up for seven Oscars including Best Picture. The other nominations include Best Supporting Actor (Arkin), Best Sound Editing, Best Music (Desplat), Best Sound Mixing, Best Editing, and Best Screenplay. 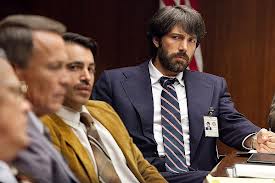 The acting in this film is really good. Arkin and Affleck are both great in their roles. It’s equally fun to see Bryan Cranston in a new and interesting part. John Goodman finds himself in a Best Picture contender again, after being a part of The Artist. The whole cast really does a great job in this incredible movie. They also managed to find people who really resembled the real people they were asked to portray. This attention to detail is a really important aspect of the film as a whole.

To tell this kind of story, Ben Affleck had to be true to the details. This is where I think the movie really succeeded. The true story is a rich one and didn’t ask for much enhancement from Hollywood to become a great screenplay. With great editing and acting, this movie kept the suspense going through the very last moments of the story. The movie is also filmed beautifully, and takes advantage of each of the sets used. From the camera work to the costuming, the movie is really nicely put together. They also managed to recreate many of the locations that are important to the story. I think much of this should be credited to Affleck, who demanded close attention to details when he started making this movie. 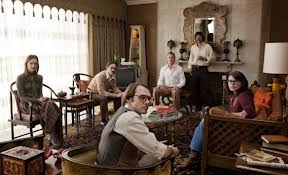 One other note on this movie:  The story is very nicely balanced between the happenings in the Middle East, Hollywood, and the C.I.A. offices. This is where the film really worked for me. I was worried that one aspect or another might take over the majority of the film, but it’s so perfectly divided and edited. Although it’s not my first choice, I think it has an excellent chance at winning Best Picture this year.

This is a really good movie. Seeing it has made the Oscar picks even harder to settle on this year. If you haven’t already seen this, I hope you take the time. It’s an amazing story that has taken more than 30 years to be told. It has a lot of suspense, and the pace is wonderful. I give this one 5 out of 5 stars.