Fresh off of his success against Apollo Creed (Weathers), Rocky (Stallone) is struggling with the price of success. Despite failing to beat Creed, Rocky is the hero from their one and only fight. As Rocky retires and prepares for a new life, Apollo is faced with major doubts about his abilities. Soon Apollo convinces Rocky to fight him once more. With a pregnant Adrian (Shire) unhappy with his decision, Rocky looks for ways to win and secure his family’s future. The epic battle could prove costly to both of these heavyweights.

Rocky II has many of the elements that made the first film in the series so successful. Stallone and the rest of the cast do a wonderful job with the script. Talia Shire and Burgess Meredith both give powerful performances in this film. Stallone also continued his success with the emotional and unique portrayal of this rough-cut boxer. This time the story and direction both came from Stallone, in his second effort as a director.

The film uses the city of Philadelphia as a wonderful backdrop. The camera work is really nicely done, and it feels right when paired with the familiar soundtrack. The fight scenes still work nicely despite the age of the film.

Rocky was a runaway success in 1976, winning an Oscar for Best Picture. While Rocky II was a financial success, it failed to meet the critical success of the first film. I think this is largely due to the lack of interest in a film that seems to avoided going too far from its origins. This is the major weakness of an otherwise good movie. The story seemed like a safe bet for making money while it avoided challenging the audience with anything new or unexpected. 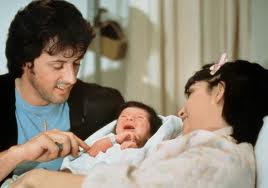 This is one of those movies that I enjoy every time I see it. This is the kind of film that really satisfies the need for a happy ending. The story is not the strongest, but it works with the subject matter nicely. If you’re a fan of the original film, I wouldn’t wait to see this one. If you’ve already seen this one, I hope you take the time to see it again. I give this one 3.7 out of 5 stars.