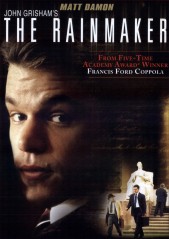 Rudy Baylor (Damon) is fresh out of law school and desperate for work. When he signs on with a seedy law firm he has one big case coming with him, a case against a wealthy insurance company. With his new coworker Deck (DeVito), Rudy begins preparing for his first trial and soon finds himself in the big leagues. With the trial looming Rudy also has a new concern, the welfare of young woman (Danes) who’s been badly treated by her husband. As he seeks to find his footing in the justice system, Rudy finds out that the game isn’t always played by the rules.

John Grisham’s sixth novel was brought to life through the skilled direction of Francis Ford Coppola (The Godfather). Thanks to a great adaptation the actors had plenty to work with. Matt Damon (Contagion) is wonderful in the lead role as the young and inexperienced attorney. He’s got a surprisingly good chemistry with Danny DeVito (Hoffa), and he plays well opposite both Jon Voight (Midnight Cowboy) and Claire Danes (Romeo + Juliet). Overall good acting is a great pairing for a great story in this movie.

Aside from the acting and story, this movie also has a really nice visual sensibility. The camera work flows naturally from scene to scene and never feels overdone. Add in a nice score and this is a really well-made movie. For a powerful story, the images are strong enough to carry the emotion throughout.

I don’t know that there’s much to criticize with this movie. The casting is wonderful, with appearances from Danny Glover, Mickey Rourke, Virginia Madsen and many more familiar faces. The visuals and all the other pieces are there in this one. I’ve seen this movie many times, and I hope to see it many more. I’m surprised at the lack of recognition this film got during the award season. It’s one of my favorite novel to film adaptations. If you’re a fan of courtroom dramas or drama in general, I suggest seeing this movie. I give this one 5 out of 5 stars.