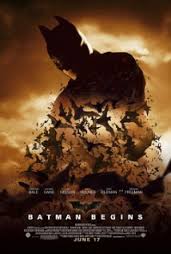 Bruce Wayne (Bale) has disappeared, leaving behind an empire built by his deceased parents. Their deaths weigh heavily on Wayne as he wanders the globe as an anonymous figure. He’s searching for a chance to do something that will relieve the guilt he feels. Soon he finds his mentor in Ra’s Al Ghul (Watanabe) and begins a transformation into a fierce and talented warrior. Meanwhile, Gotham City has become a haven for crime and corruption. The Scarecrow (Murphy) and the League of Shadows have terrorized the people of this metropolis with violence and intimidation. When Bruce Wayne returns to Gotham he begins to reinvent himself as a public figure. He also becomes Batman and begins to fight against those trying to destroy his city.

In 2005 this film take a new and fantastic approach at the iconic character of Batman. Christopher Nolan and screenwriter David Goyer (Man of Steel) approached the story from the psychological side of this troubled hero. Their story became a great platform for a talented cast that includes Christian Bale (The New World), Michael Caine (The Cider House Rules), Liam Neeson (Schindler’s List), and Gary Oldman (JFK). The cast also includes the talents of Morgan Freeman (Driving Miss Daisy), Cillian Murphy (The Dark Knight Rises), and Ken Watanabe (The Last Samurai).

For fans of earlier Batman films, this was a huge departure from the comic book styling of the characters and the action. Nolan brought a much harsher and more intense version of the story to the screen. The success in this movie is the fact that it went outside the genre in every sense. The movie is dark in both the visual and emotional sense. The writers took care to replace the comedic aspects of these villains with a much more sinister sense of terror and violence. These changes were successful in almost every aspect of this movie. Tim Burton, who directed Batman in 1989 said, “Nolan certainly got more to the root of what the Batman comics are about.”

The acting in this film is really nice. With this many Oscar winners and a great script the actors really shine. Bale took his usual intensity and brought two great characters to life. He does a nice job as the playboy millionaire Bruce Wayne and also shows up as the intense and driven Batman. His performance isn’t the only success in this movie. Oldman, Freeman, and Neeson also do wonders with their roles. The rest of the cast is equally well-fitted for the parts they play. Overall, one of the better comic book films from an acting standpoint.

The visuals are also incredible. No detail seems overlooked in this epic story. With great camera work, editing and CGI the movie has a great feel to it. Add in an incredible score by Hans Zimmer (The Holiday) and there is little chance of being disappointed.

Criticism for this movie can be limited to two aspects of the film. The first is the performance of Katie Holmes (Go), who feels out-of-place in the part she’s asked to play. I don’t dislike Holmes, but she wasn’t right for this movie.  Second was the relationship between Bruce Wayne and Holmes character, Rachel Dawes, which feels glossed over in the film. The writers should have gone deeper with the relationship since it would have added depth to both characters and the story as a whole.

This movie was a breath of fresh air for the comic book genre of films. If you’re a fan of Batman or any of the comic book heroes out there this is likely one you already have in your home collection. If you haven’t seen this one, I think you need to take the time. This is a great opener for a series that includes The Dark Knight and The Dark Knight Rises. It’s dark, but doesn’t push too far with the violence or the psychological side of the characters. I loved this one and I give it 4.8 out of 5 stars.