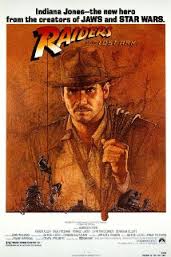 Raiders of the Lost Ark

Indiana Jones (Ford) is a college professor and archaeologist who’s always ready for his next adventure. His risky attempts to capture history have taken him all over the world. When the United States government approaches him he’s in for a much riskier job than he ever expected. With his former flame (Allen) at his side, Dr. Jones is going to try to find the Ark of the Covenant before his Nazi counterpart (Freeman) can. This search could keep a secret power from falling into the wrong hands. Along the way he’s going to have to face his fears and take risks to get what he wants.

The film that started the Indiana Jones saga was a great one. Director Steven Spielberg worked with a story written by George Lucas and created much more than a movie. This film created a character that continues to be popular more than 20 years later. Harrison Ford (42) became larger than life in a role that feels like it was written for him. The cast also includes Karen Allen (Starman) and  Paul Freeman (Hot Fuzz), along with a cast of characters that feels perfect for this fantastic setting.

This adventure film won four Academy Awards including Best Effects, Best Sound, Best Editing, and Best Set Decoration. This movie also won a Special Achievement Award from the Academy for Sound Effects Editing. This movie wasn’t only successful with the critics though. To date, Raiders of the Lost Ark has grossed more than $380 million dollars worldwide.

The sound and visual effects in this one were cutting edge in 1981 and despite the improvements in technology, this film still holds up nicely. Some of the visual effects do show their age, but it’s nothing that hurts the overall experience of watching this classic adventure. In addition to the effects, the camera work takes advantage of the action as well as the setting.

George Lucas (Star Wars) and Lawrence Kasdan (Body Heat) wrote an awesome story which was nicely worked into the screenplay by Philip Kaufman (The Right Stuff). Their efforts combined to create Indiana Jones, a character I believe is America’s version of James Bond. The bravado mixed with a certain level of sarcasm fits perfectly with the movie and also with Harrison Ford. Their story was also strong enough to pave the way for three additional films.

Perhaps the only thing working against this movie is time. People new to the film will likely see the special effects and the styling of the film as outdated. I’m not sure that it matters to most fans of the film, but it’s something unavoidable with these kind of movies. Thankfully the special effects aren’t prominent enough to take away from the overall experience of this film.

I don’t know how many of my readers have not seen at least one of the Indiana Jones films. The movies are filled with action and adventure, but they don’t push too far. This makes them movies that most families can enjoy together. You need to watch this one if you’re a fan of action, adventure, or Harrison Ford. If you’ve already seen it, perhaps it’s time to watch it again. I give this one 4.7 out of 5 stars.