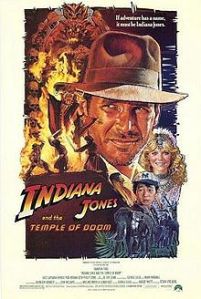 Following a series of close calls, Indiana Jones (Ford) has landed in India. Alongside him is a club singer and diva, Willie Scott (Capshaw). He’s also got a pint-sized sidekick, Short Round (Quan), with him. Now they’ve inadvertently become part of a search for magical stones stolen from the village. The search leads them into the center of a dangerous cult who’ve taken slaves to further their hold over the people of the region.

Following the success of 1981’s Raiders of the Lost Ark, Steven Spielberg brought back the adventurous archaeologist in this 1984 sequel. This time he added Jonathan Ke Quan (Goonies) and Kate Capshaw (Black Rain) to the cast. Capshaw beat out over 120 other actresses for the role and met her future husband (Steven Spielberg) in the process. The remainder of the cast consists of people who feel like they were made specifically for the roles they got.

The story in this one is good, but not as endearing as Raiders of the Lost Ark was. As with the first film, this story takes full advantage of the characters own personalities. Unfortunately, this movie also takes advantage of some stereotypes that probably wouldn’t be written into this movie today. The portrayal of the people of India stretches things a bit, something Spielberg has mentioned in criticism of his own work. Despite some of the shortcomings, this movie did earn an Oscar for Best Visual Effects. John Williams was also nominated for his memorable score.

The movie stays away from committing to anything that would have to be carried into a sequel. Like the other films, this works to their benefit since it allows you to experience this movie without having seen the first one.

The action and violence in this movie are intensified from the first film. This script has a darker feel, and it misses out on some of the comedic moments with the villains that the other films in the series capitalized on. This also earned the movie a PG-13 rating.

Overall, this is still a good movie. With the four films in the series, I would place this as the third best. It’s got the classic Indiana Jones moments, but misses out on the charm of the first film. It’s also got great visual effects and camera work throughout. If you’ve seen these movies before, give them another shot. Almost thirty years later, this is a fun movie that shows its age, but not in a way that makes it less enjoyable. I give this one 4.3 out of 5 stars.