Between now and the end of the year studios will be putting their best work out. As the movies vie for nomination among the major award shows, we get the pleasure of seeing some of the best that Hollywood has to offer. Below are the movies I’m most interested in seeing as the year comes to an end. I’ve limited the first edition to five, so stay tuned for more in the next few days. Check out the links in each section to the trailer for the film.

This reboot of the 1976 classic looks like a promising attempt. I’m excited to see Julianne Moore in a role that’s got so much intensity. I’m also interested in how the story will be interpreted for a 2013 audience. Boys Don’t Cry director Kimberly Peirce is good with sensitive subjects and gritty stories so I’m hopeful that this will be a success. My horror knowledge isn’t deep enough to predict how this one will be received, so we’ll leave this one as a question to be answered later. Check out the trailer here.

My Prediction: I have no idea.

If anything screams Oscar, it’s probably a star-studded film with a compelling story. This movie is based on the book by Solomon Northup, which was his own account of his experience as a kidnapped man forced into slavery. Steve McQueen has worked with tough subjects before. His films Hunger and Shame were both incredible and I see no reason why this won’t be the same. Check out the trailer here.

I’m really excited about this one. The ensemble cast includes some big names and some of my favorites. In addition, the story comes from the same sick mind that created No Country For Old Men, Cormac McCarthy. Factoring in the fact that this movie is about a lawyer who gets in over his head with drugs, and I think it adds up to an intense experience. Ridley Scott (Gladiator) rarely disappoints, and I think this won’t be any different. Check out the trailer here.

If you’ve read the book I expect that you’re at least curious about the long-awaited film version of the classic science-fiction novel by Orson Scott Card. Adding in some big names like Harrison Ford and Ben Kingsley definitely doesn’t hurt this one either. Gavin Hood has done some good work, but a successful film here would be a major leap in his career. As a fan of the book I’m hopeful that the movie stays true to the story. Check out the trailer here. 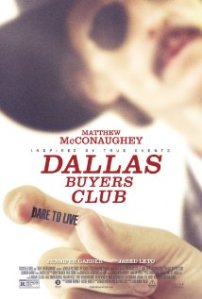 If you’re looking for an interesting film I suggest looking at this one. Matthew McConaughey stars in this story about a Texas man who contracted AIDS and his fight with the medical system over alternative treatments. I’m expecting this to be a Best Actor nomination for McConaughey, who has continued to impress me. (See my review for The Paperboy) I’m also excited for Jared Leto, the initial buzz about his performance has been intriguing. Director Jean-Marc Vallée hasn’t done much that I’m familiar with, but I’m rooting for him with this one. Check out the trailer here.

So there you have it, the first five films I’m excited about this year. I’ll be posting these in the order they’re expected to be released. Let me know what you’re excited for, or what you think about these films.