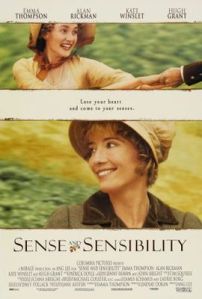 Written by Jane Austen and adapted by Emma Thompson

Marianna, Elinor, and Margaret Dashwood have fallen victim to inheritance rules that have left them nearly destitute. Now, along with their mother, the girls are working to reestablish themselves with hopes for a better life. Their best opportunities are likely to come through marriage. While Elinor’s mind rules her actions, her younger sister Marianne is ruled by her heart. Now these two sisters and total opposites are seeking the same thing, love.

Emma Thompson managed to do something incredible with a novel more than 180 years old. She made it relevant and accessible again. Her adaptation won her an Oscar for Best Screenplay. The film was directed by the amazing Ang Lee (Life of Pi) and earned a total of seven Oscar nominations. The cast included Emma Thompson (Brave), Hugh Grant (About a Boy), Kate Winslet (Titanic), Alan Rickman (Harry Potter), and many more familiar faces. Emma Thompson and Kate Winslet both received Oscar nods for their performances. The film was also nominated for Best Picture, Best Cinematography, Best Costume Design, and Best Original Score. 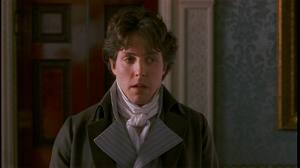 As I’ve already stated, the biggest success in this film was being able to revive a story after close to 200 years and making it relevant to a new audience. Emma Thompson did a miraculous job with the book, making it a lighter version of an emotional tale. This isn’t to say that it’s not emotional, the film is a roller coaster of emotions. 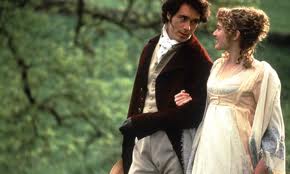 This success is also a testament to the cast. In addition to the short list I’ve given, the film features so much talent. The story is really carried by Thompson and Winslet, who balance one another out and make the story more interesting. Alan Rickman and Hugh Grant also do a wonderful job with their roles. It’s nothing new for Grant, who manages to bring his awkward charm to the role. Rickman, on the other hand, seems to brighten up his role with a level of emotion I think is necessary.

The film is visually impressive and features a wonderful score written by Patrick Doyle (Brave). The costumes and locations were nicely chosen to bring an era to life. This should be appealing for anyone who loves the Victorian period.

My only complaint with this movie is length. The film seems to push just a little too long, making some of the last third drag. At over two hours, the action seems to let up a bit more than it should late in the story. It didn’t hurt the film too much, but it creates a need for patience that I think could have been avoided.

This is a wonderful film. If you’re a fan of Jane Austen’s work; make sure to see this one. I’d also recommend this to anyone who likes adaptations of novels for the screen. If you like romance or drama you should appreciate this one. It’s a movie the whole family can enjoy. I give this one 4.4 out of 5 stars.