The earth has already survived one devastating attack from an alien race known as the Formics. Now the international community has come together to train the brightest young minds to defend the planet. Ender Wiggin is among the youths chosen to become part of this training program. When he begins to rise to the top, it becomes apparent that he might be the one to defend the planet from another attack. 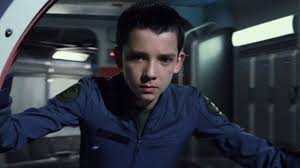 Ender’s Game is one of the best-selling science-fiction novels ever written. Orson Scott Card originally published the book in 1985. After years of hoping, fans of the book finally got their wish when Gavin Hood adapted the book for the big screen. With a screenplay ready, the film needed an impressive cast. Asa Butterfield (Hugo) was chosen to take on the title role. In addition, the film features Oscar-winner Ben Kingsley (Gandhi). Rounding out the cast are four Oscar nominees; Harrison Ford (Raiders of the Lost Ark), Viola Davis (The Help), Hailee Steinfeld (True Grit), and Abigail Breslin (Little Miss Sunshine).

The challenges associated with making this film from a beloved novel must have been incredible. Orson Scott Card’s novel has sold millions of copies and spawned a series of books to continue the story. Gavin Hood, together with Card, had to decide how to bring out the essence of the story within an acceptable amount of time on the screen. Despite the elements lost in the adaptation, the story worked nicely. The major moments of the film are intact, and the nuance of some of the lesser moments seems to find a way into the story despite the cuts. 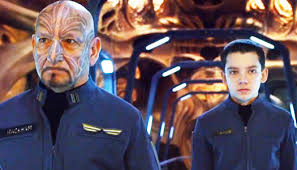 Much of the success of the story comes from the actors. Asa Butterfield is incredibly versatile, and this role proves it further. He was asked to take on the most emotionally challenging role, and he pulls it off nicely. It was also good to see him hold his own while sharing the screen with Harrison Ford, Ben Kingsley, and Viola Davis. These big names all work wonderfully with the story, but they don’t overpower the performance of Butterfield. I was also happy to see another great performance from Hailee Steinfeld. Together with the remainder of the cast, this futuristic world comes to life nicely.

The visual effects and camera work are amazing. I was surprised to see a new science-fiction film that didn’t seem like it would be better in 3D. The sets and costuming all work nicely to make the future world seem realistic and interesting. I was also happy to see some of the aspects of the book brought to life just as I’d imagined them. I’m not sure what other fans of the novel will see, but it worked with my vision of the story. 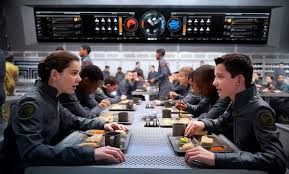 This is a classic story that’s come to the big screen after years of hopes and anticipation. The acting and the visuals are wonderful. If you’re a fan of the book I think it’s worth seeing. Like any adaptation, sacrifices had to be made, but I don’t think it was overly bad for the film. This is also a great film for the family to enjoy. It does have some intense moments, so be prepared for some action. If you’re a science-fiction fan, this is one for you. I give this one 4 out of 5 stars.