Man with a Movie Camera

In 1929 Dziga Vertov and his wife completed one of the more impressive projects in experimental film-making. The resulting film was the product of over three years worth of filming. Intended to depict 24 hours in a Soviet city, the filming took place in three cities over the three-year production period. While Dziga filmed, his wife went to work editing. The result is a film that broke most of the commonly held rules about film-making.

This movie is a great study in editing and camera techniques. The film utilizes close-ups, tracking shots, and a number of other techniques. Some of these effects are used with impressive results. The image below is one example of the work produced. 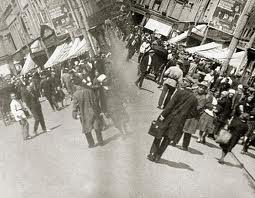 This isn’t a film that everyone will enjoy. It think that it offers two unique aspects. One is the wide variety of techniques used. For students of film this is a must-see. The second thing offered by this film is a wonderful look at everyday activities within Soviet cities in the 1920’s. 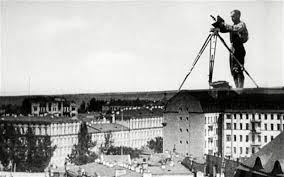 If you’re interested in the origins of film, I would encourage you to check this out. This movie is surprisingly entertaining, despite lacking any story elements. I would also suggest this to anyone interested in Soviet history from the time period of the film. I give this one 4 out of 5 stars.