While seeking access to a computer game company, David stumbles into a strange computer. The cryptic messages from this computer feed David’s curiosity, leading him to search for a way into this new system. When he finally gains access, he doesn’t realize that he’s gained access to a government supercomputer. Without this knowledge, David inadvertently puts things in motion that could start World War III.

Nothing made more sense in 1983 than a film about a nuclear war with the Soviets. Director John Badham (Saturday Night Fever) took on the film with a screenplay by Lawrence Lasker (Sneakers), Walter F. Parkes (Eddie Dodd), and Walon Green (Eraser). His cast included some of the popular faces of the eighties, including Matthew Broderick (Ferris Bueller’s Day Off) and Ally Sheedy (The Breakfast Club). The film also features John Wood (Chocolat) and Dabney Coleman (You’ve Got Mail). 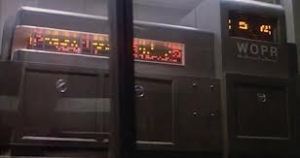 This movie features nice performances by the young Broderick and Sheedy. Dabney Coleman and John Wood are also great in their roles. The remainder of the cast does a good job filling in the rest of the story.

The movie features a lot of outdated technology. From huge floppy discs to massive computers, the age of the film is right out there in the open. Thankfully the film doesn’t rely on the technology as much as it relies on what the computers are capable of. This is great since it keeps the film focused on something that still works nicely.

The flaw in this film is the slightly sentimental moments that come and go. Instead of committing to an emotional theme early, the movie seems to go back and forth. This makes the ending feel a bit weaker than it could have. Still, it’s not a killer flaw, and the story is still fun to see.

Sure, the computers and the technology are dated. Sure, the political tension between the United States and the Russians has been diffused. Underneath all of the dated references there’s still a good movie here. The real message of the film comes through as nicely today as it did in 1983. If you’re able to see past the things that date this story, you’ll find a fun experience. If you’re a fan of the cast this is one for you. I would also suggest this to anyone who likes good drama. I give this one 3.5 out of 5 stars.